Meet Along the Way: Sharon Tuschhoff

This story was first published in the Winter 2022 issue of mind + body. 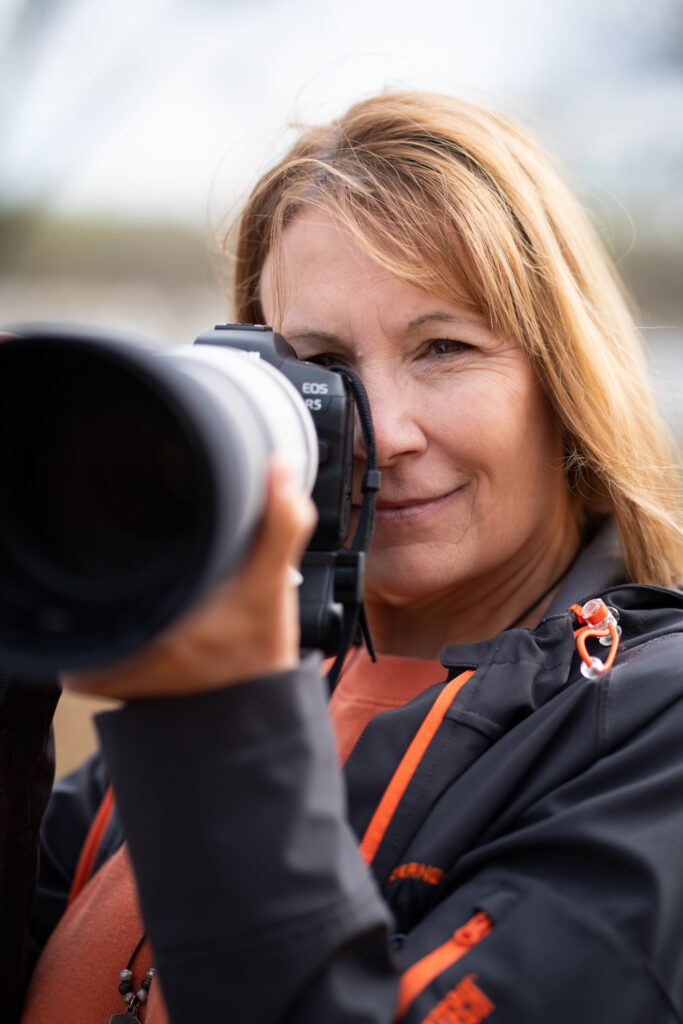 Sharon Tuschhoff goes out to notice the natural world, bringing nothing but herself and a camera to capture all she sees. She snaps photos of owls and hummingbirds, big cats and bears, landscapes and flowers. Anything in the wild is fair game for Tuschhoff’s eyes and camera.

Wildlife photography is a hobby Tuschhoff fell into 15 years ago, and now, she has photos published in calendars, travel guides and catalogs. She also posts her work to her Facebook page, GoneWild Photography, to show others some of the beautiful sights she’s seen, but she says the hobby is “mostly” for herself.

“You’ll see some things, like even unusual birds that you wouldn’t have seen … or you might see little animals that you wouldn’t expect to see, like a little chipmunk eating mulberries,” Tuschhoff says. “You might not be looking for that if you’re in such a hurry. [Wildlife photography] forces you to look and see what is around you.”

Tuschhoff grew up on a cattle farm near Leopold, Mo., and she credits her love for the outdoors to her childhood spent there. In the summers, she says her family “just went wild,” as they hiked and explored the 900 acres of land and forestry around their home. Her father was a hunter, and she went hunting with him from the time she was 9 years old until she turned 12 years old and decided she “didn’t want to shoot animals anymore.” Her family moved to a spot near the Duck Creek Conservation Area in Stoddard County, Mo., around this same time, where she further experienced the diversity of Southeast Missouri wildlife.

Although she stopped hunting, Tuschhoff began to gravitate towards capturing animals in another way: photography. Approximately 18 years ago, she started taking photographs of horses and action shots of her son competing at the rodeo. Gradually, Tuschhoff transitioned into wildlife photography, a genre of photography described in the Collins English Dictionary as documenting wildlife in its natural habitat.

Tuschhoff still remembers the photo she took 15 years ago that made her fully realize her passion for the form of photography.

“My first picture I was extremely excited to get was a family of otters. I was looking for otters for a long time,” Tuschhoff says. “I went out [to Mingo National Wildlife Refuge] on New Year’s Day. It was a day to myself, my New Year’s present.”

Tuschhoff walked into the wildlife refuge alone, dressed in winter clothing, with her camera ready. As she explored, she heard sounds of ice popping near a frozen body of water. So, she stopped; she waited. Suddenly, little otter heads began poking out of the ice, looking at Tuschhoff for a moment before continuing along the water, cracking the ice along the way. Finally, she says the otters relaxed and played on a log. She captured some photographs of the playful creatures.

After the magical encounter with the otters, Tuschhoff left thinking, “I want more.” She started taking nature photography trips, first to Yellowstone National Park, which she has visited four times in total. Then, she went to Alaska for the first time with her husband and son in 2016. She warned both of them that she was going specifically to get photos of whales, bears and other wildlife. Tuschhoff says her son usually won’t join her if she’s bringing her camera along.

“He doesn’t understand how I can sit in one spot for three hours and not move,” Tuschhoff jokes.

On the last day of her first Alaska trip, the seaplane Tuschhoff chartered in order to see bears couldn’t land because of the heavy fog. Although she was disappointed, she looked on Facebook later and stumbled across a “beautiful photo of a bear in the water chasing fish.” She asked the Facebook user where they took the photo, and that’s how she learned about the Katmai Wilderness Lodge in Alaska.

The second, third and fourth times Tuschhoff visited Alaska, she went alone and stayed at the Katmai Wilderness Lodge, a remote stay in the Katmai coastal wilderness known for its extraordinary fishing and bear sightings. At the lodge, Tuschhoff says there is “very little internet,” and she would typically only have a few minutes of connection in the early morning.

“You are in the wilderness. … You absolutely have to disconnect,” Tuschhoff says. “You have no choice but to disconnect and just enjoy it while you’re there.”

She says the days in the Katmai wilderness were filled with boat rides and hikes to spots where bear and moose activity might be. Tuschhoff and the other dozen visiting nature photographers followed bear tracks until they came upon one. Once they met up with a bear, the group remained close together and moved off into the grass to take photos. Tuschhoff says she’s been as close as 16 yards from a wild bear.

Tuschhoff took her next big photography adventure in January 2022 to a place she’d always dreamed of visiting: Africa. She spent two weeks with a wildlife photography group exploring Kruger National Park and the Sabi Sands Game Reserve in South Africa.

The photography group would go on safari rides around the parks in the morning and evening, depending on animal activity or temperature. She says the animals she saw on the trip left her in a constant state of awe. She saw leopards walking alongside their safari car. She saw mother lions hiding their babies from male lions. She saw a herd of rhinos, some with their horns sawed off by park rangers to protect them from poachers. At one point, Tuschhoff saw a mother elephant flapping her ears at their safari car, a sign of agitation, which prompted their guide to turn off the car, as everyone remained quiet.

“If you know animals — and you have to if you’re a wildlife photographer — you know when to sit still and be quiet. You just know,” Tuschhoff says.

Tuschhoff says the guides for their safari trips knew the leopards so well, they could name and recognize individual leopards just by looking at their tracks. She thought this was amazing and says she wants to go back to Africa, not just for the animals, but for the people she met there, as well.

As for the actual practice of wildlife photography, Tuschhoff describes it as “meditative.” She is going out alone, observing and reflecting on the beauty around her. Many times, she’ll have to wait hours to see a subject for one of her photos. It is a careful, quiet waiting game, and it requires discernment about when to leave a creature alone.

Recently, Tuschhoff returned from her first trip to South America, where she saw “jaguars every day” and other “unusual sightings.” She is already planning her next photography adventures to Africa and Alaska. It is a hobby she doesn’t anticipate ever getting bored of.

“[Wildlife photography] is a stress reliever for me,” Tuschhoff says. “To be able to go out and just be.”

Previous Ghosts of Christmas Past
Next Meet Along the Way: Joann Lester