Meet Along the Way: Joann Lester

This story was first published in the December 2022 issue of The Best Years with the title “Faces of Southeast Missouri: Joann Lester.” 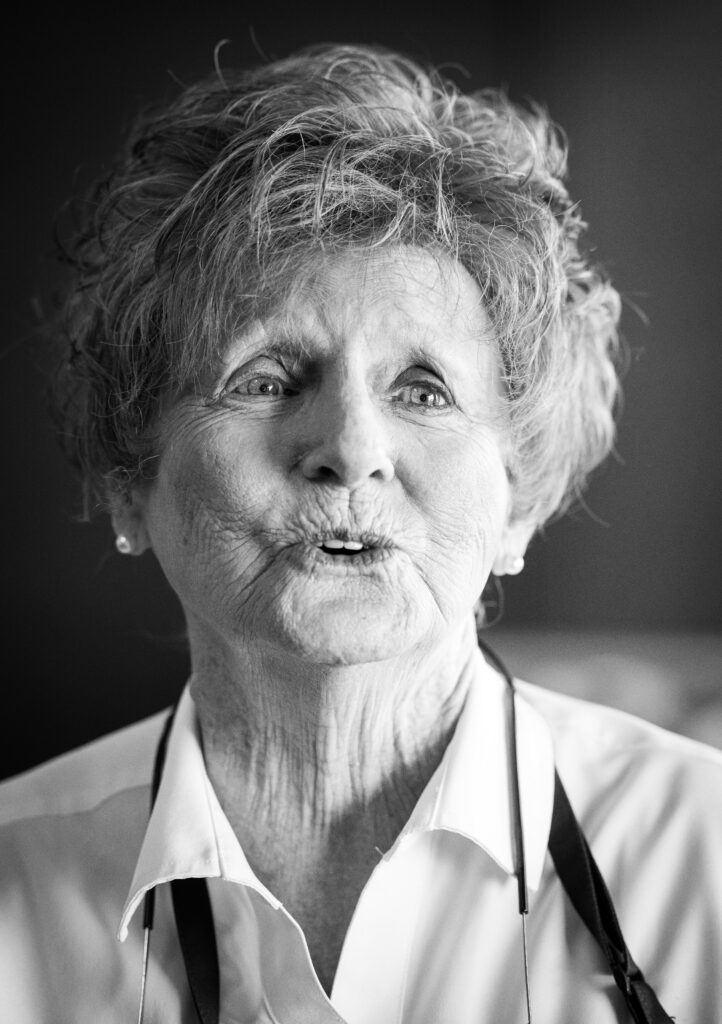 Joann Lester sings to customers at Chick-fil-A. Lester has worked there since 2012. Photo by Aaron Eisenhauer

When Joann Lester walks into the dining room of Chick-fil-A in Cape Girardeau, she instantly begins serving people: grabbing their trays and trash, rushing to open doors, chatting with the regulars and giving out hugs. Still, even more than her joyful attitude, Lester is known for singing throughout her shift.

She sings to diners, employees, people she knows and people she doesn’t know. She started working at Chick-fil-A in 2012 and says “everyone” knows the songs she sings now.

She says her most popular song choice with customers is the 1950 song “Why Don’t You Love Me,” by Hank Williams. One afternoon, Lester walks up to a table where a couple is seated and begins singing loudly for all to hear, “Why don’t you love me like you used to do? / Why do you treat me like a worn-out shoe?” The couple smiles and joins Lester in singing the tune. Other people in the dining room glance up from their lunches to watch the impromptu performance.

“[The customers] come to see me … oh, yes. A woman came in the other day and said, ‘We go through the drive-thru all the time, because you’re not here in the dining room.’ Another woman came in and said, ‘I come just to hear you sing “Why don’t you love me like you used to do?”’ I’ve taught everybody, every employee that song. And we sing it [together],” Lester says.

Most of the songs Lester sings are 1950s pop or folk songs, along with a few American popular songs passed down through oral tradition such as “Old Dan Tucker.” Lester says she learned most of these songs from her mother, Beatrice “Bea” Skinner, when she was a child. Lester says she has always been interested in music and used to do informal performances with her sister, Joyce.

“Me and my sister, we could harmonize, and she played the guitar. We’d just sing, and everybody thought we were so good. They thought probably one of these days, we’d be in Hollywood or somewhere,” Lester says.

Lester grew up on a farm outside of Commerce, Mo. Her father, Joe Skinner, grew soybeans and corn, while her mother, Bea, helped on the farm and cooked. Today, Lester says she’ll drive around the town of Commerce and reminisce on the memories she made there in the dance hall doing the jitterbug or watching cowboy movies at City Hall.

One of Lester’s hobbies, besides singing, is collecting cookbooks. She says she has more than 100 cookbooks stored in her house and her daughter’s barn. Only recently has Lester started giving away the cookbooks to her coworkers and family members who want them.

From singing at work to collecting hundreds of cookbooks, Lester has one thing to say to those who might critique her ways: “I’m 85 years old. I’ll do what I want to.”

Previous Meet Along the Way: Sharon Tuschhoff
Next meet along the way: Phyllis Johnson