meet along the way: Phyllis Johnson

This story was first published in the September 2022 issue of The Best Years with the title “Community Cookbook: Goulash, by Phyllis Johnson from the Golden Angels in Cape Girardeau.” 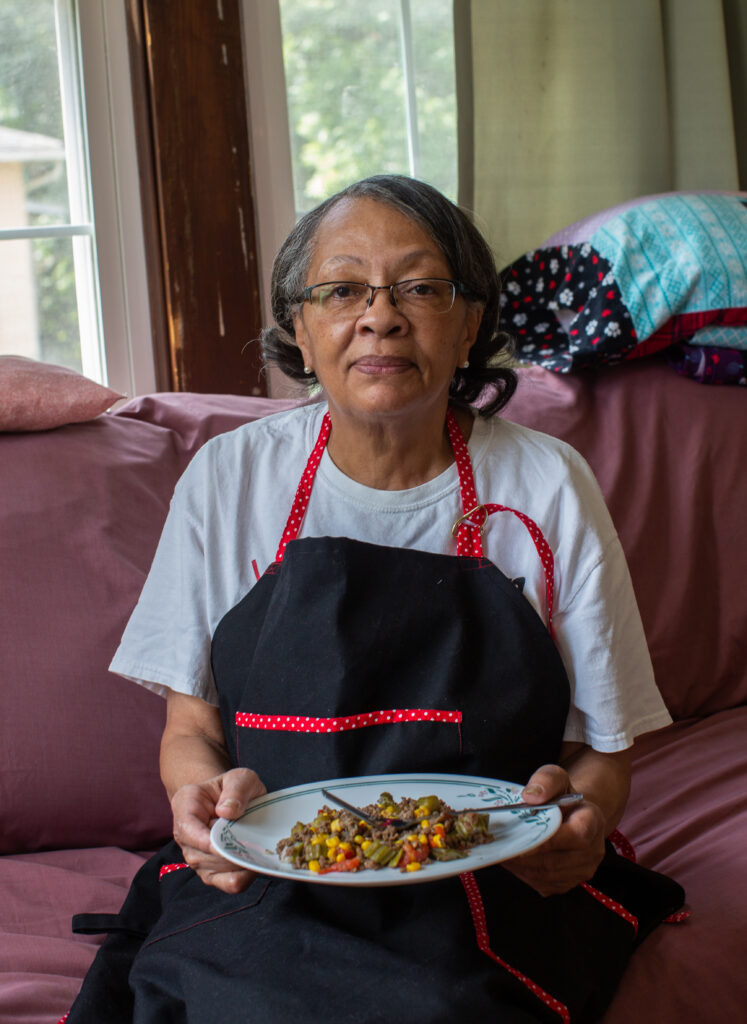 Phyllis Johnson was raised by her father on a farm in Caruthersville, Mo. She remembers picking and chopping cotton, pulling corn and working in the garden. Johnson says on the farm, she “did it all” and “enjoyed it all.” When she was at her mother’s house, Johnson learned to cook. She says any time her mother was in the kitchen, Johnson and her oldest sister were beside her.

In 1964, Johnson moved to Cape Girardeau to be closer to her mother and sisters. She lived in the area for a few years before she left again. After that, Johnson lived in Texas for 20 years, and while there, she put her gardening skills to use. One afternoon, Johnson says she helped a neighbor weed her garden. As Johnson pulled weeds out by their roots, she says the neighbor was “amazed:” The neighbor had never seen weeds taken out of the ground so completely.

Johnson returned to Cape Girardeau in 2006. Almost as soon as she returned, one of her neighbors asked her to be the receptionist and coordinator for a group called the Golden Angels. Johnson agreed and joined the Golden Angels, a group of senior women who meet every Thursday at the House of Hope.

When Johnson attended her first meeting, she realized she knew some of the women in the group from childhood. They saw her and said, “We’ll see you every Thursday,” and they did: Johnson was their coordinator.

“I became one of them, because we did everything together. One didn’t do everything [alone]; we all did it together as a family,” Johnson says.

Johnson says the group started in the 1990s, when they began meeting in a building on the corner of Sprigg and Locust Streets. The group outgrew the building and eventually had 25 members with some of the women’s husbands joining the Golden Angels, too. Now, the Golden Angels is made up of five members, all single women who are incredibly close with one another.

“We are a bunch of sassy old women,” Johnson says. “We don’t mess with nobody, and we pray nobody messes with us, ‘cause they will have trouble on their hands.”

Every Thursday, the Golden Angels gather to talk, quilt, exercise, eat, craft and listen to guest speakers together. Mostly, Johnson says the group likes to “travel and eat.” In April, she says they “get hyped up” for their annual road trip to the Dogwood-Azalea festival in Charleston, Mo., where they explore the town, look at quilts and eat all types of food.

Although their activities change each week, Johnson says they have a potluck meal every Thursday, with each woman bringing one or two dishes. Johnson says when she brings her mother’s goulash to the potluck, everyone asks for the recipe.

Louise Anderson, Johnson’s mother, created goulash from combining ingredients she found in their kitchen, a practice Johnson has carried into her own cooking. With her vegetable soup, Johnson says she’ll use whatever is in her refrigerator — except for peas, which her grandchildren beg her not to add into the soup.

Family is important to Johnson. She says she tries to live near her family, but with four children, 13 grandchildren and 20 great-grandchildren, it’s tough to be physically near everyone. When they gather, Johnson says there’s always food involved.

“[Recipes] are important, so the younger generation can see how we ate,” Johnson says.

Johnson loves to cook, but she rarely writes her recipes down unless one of her family members ask her to. Recently, her grandson asked for a cookbook of her recipes, so Johnson made a homemade cookbook for him.

Now, he can make her famous meals and share them with his own family.

Brown onions and cook beef together over medium heat in skillet; cast-iron skillets are recommended. Season with salt, pepper or other preferred seasoning. Make sure the beef is cooked thoroughly before draining the excess fat in a colander. After draining, put the beef and onions back on the skillet. Add corn, tomatoes and okra. Cover the skillet and simmer for approximately 45 minutes. Serve with salad, a side dish or alone!