meet along the way: Christina Lane

This story was first published in the August 2022 issue of “The Best Years.”

Recipes tell the stories of communities and the people who shape them. Each recipe is more than a list of ingredients and steps: It is a written legacy of the individual who created the dish, their family and history. This monthly series highlights one of these legacies and gives readers the chance to create the recipe themselves.

Christina Lane grew up in the small town of Tunkhannock, Pa., about half an hour from the city of Scranton, Pa., a town famous for being the setting of the television sitcom “The Office.” She lived in Pennsylvania until 1999, when her husband got a job at Procter & Gamble in Southeast Missouri. They were going to “try out” the area for three years, but now, 23 years later, the Lanes still live here.

Despite the move, Lane remembers Northeastern Pennsylvania and her childhood vividly. She says almost every weekend in the summer or during the holidays, bazaars popped up around town in which women from local churches sold pierogies to raise money. Polish, Welsh, Russian, Lithuanian and Italian nationalities were all represented at the bazaars, which Lane calls a “mixing pot of people and food.” These events were some of Lane’s first encounters with the pierogi dish.

Cooking has always been an important part of Lane’s life, even before she knew how to make pierogies. She says she started cooking around the age of 6 or 7. Her mother didn’t enjoy cooking, so Lane made meals for their family almost every day with her sister, Rebecca. Lane grew up with her sister and five brothers, which she says could make cooking meals difficult.

“We had to really learn how to cook, ‘cause those boys ate a lot,” Lane says.

Ray loved gardening and cooking. She worked as a dietician at Princeton University for some time, and while working there, Ray noticed a man walking to the university every day on her drive. Lane says her grandmother described the man as “messy in his dressing and hairstyle.” Each day, rain, snow or shine, the man walked to the university. Lane says her grandmother would offer him a ride, but he always refused, until finally, he took her up on the offer.

“As she found out, [the man] was Albert Einstein,” Lane says. “And she had no clue. People were saying, ‘You know, that’s Albert Einstein,’ and she’d say, ‘He puts on his pants the same way all of us do.’ That’s just how she was.”

Lane says her grandmother became friends with Einstein, as she started making his meals and coffee. She says they would ride into Princeton together, and Einstein once had lunch with Lane’s two uncles.

This story shows the power food has in bringing people together. Lane has always understood this power, so she wants to ensure her children and grandchildren know how to cook. So far, Lane feels like she’s accomplished this. She says her son, Ryan, is just as much of a “foodie” as she is. They both send photos of their food to each other and try to recreate recipes from restaurants to “make them better” at home.

Lane enjoys teaching her grandchildren to cook, and she says all of them except for the youngest know how to make pierogies. Lane makes the Polish dumplings with her family every Easter and Christmas, just like she did when she was younger.

Christina Lane’s stepfather’s mother taught her how to make pierogies when she was a child. Lane says she makes the dish for Christmas and Easter, but her grandchildren want the dumplings for every holiday and occasion.

Although Lane credits her grandmother, Ray, for her love of cooking, it wasn’t Ray who taught her to make pierogies. Lane’s stepfather’s mother originally taught her how to make the dish, as they made pierogies every Easter and Christmas.

One of the reasons Lane loves the recipe is because of its “down-to-earth” nature. She says it’s a recipe you have to “get your hands into.” It’s also a recipe that can easily be made by multiple people at a time. She says someone can roll the dough, someone can stuff the dumplings, someone can boil them and someone can sauté them with seasoning. It offers a way to cook together, in unison, and make something delicious.

“Cooking is about tradition; you know, I left [Pennsylvania], and I wanted my kids to have that with them, and then the grandchildren,” Lane says. “So, I teach them. It’s just important.” 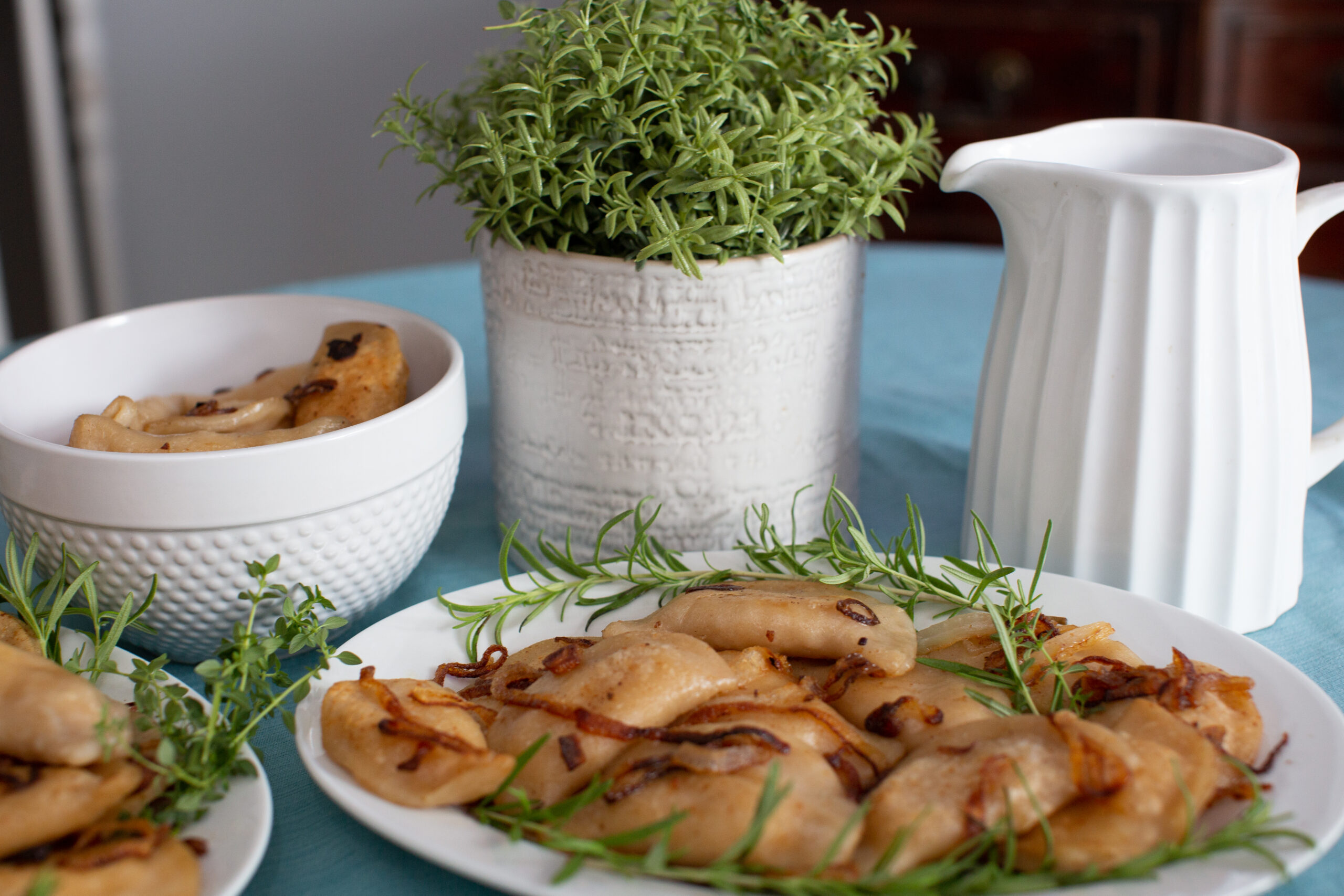 1 stick of butter (or as desired)

Start by making the dough. Pour in the flour and salt first. Then, add in melted butter and hot water to the mixture. Stir with a spoon or mixer until formed into a ball. Knead the dough until it reaches an elastic consistency, then roll out the dough until it is about 1/8 -inch thick. Use cookie cutters or drinking glasses to make circles out of the dough.

To make the filling, boil potatoes, as if you’re making mashed potatoes. For this recipe, I use 4 russet potatoes and add 1 cup of Colby Jack and cheddar cheese mix. Mash this together and scoop out small balls into each circle of dough.

Use a water and butter mixture to seal the dough as you pinch the pierogies into half-circle shapes. You can freeze them for later or boil right away. Boil about 10 at a time in a large pot. Once the pierogies float, cook for another minute or two before mixing in a hot pan with seasoning.

For the seasoning, I used shallots, sweet onions and almost a whole stick of butter. Mix on medium heat in a pan until pierogies are light brown on each side.