Emily Fox was at Lake Michigan on Aug. 2, 2017, when she found a pebble-sized piece of smooth, frosted-clear glass washed up on the shore. She didn’t know what it was, but she knew she was fascinated by it. She and her son began researching it and found its name — beach glass — and learned it takes 30 years of churning in water for a piece of glass that has been thrown out at a beach to become smooth.

The piece of glass began to heal something inside Fox.

“I found it in the morning, and I remember looking at it, and the light was hitting it perfectly, and it just glowed. I just wanted to know more about it,” Fox recalls. “I know that date [that I found the beach glass] because it was 12 years to the day after my dad had died. And when I saw that piece [of beach glass] that was perfect after it had just been broken and trash, I thought, ‘Maybe I will be able to heal at some point from [the unexpected death of my father].’”

Sea glass sits on a shelf at Emily Fox’s shop, Foxy Lady Stuff, in Jackson. Fox uses the sea glass she collects from around the world to make jewelry at her Jackson studio. Photo by Aaron Eisenhauer

When she came back to her home in Jackson after the trip, Fox popped a fake stone out of a bracelet from Goodwill and fastened the beach glass onto it. She gave it to her friend, who wore it constantly. When more people from Fox’s church began requesting jewelry from her, she decided to set up a booth at her church’s craft fair and at the Arts Council of Southeast Missouri’s craft fair in 2018.

After tearing her rotator cuff at her job as a sonographer, Fox decided to take metalsmithing and casting courses from jewelry maker and metalsmith Robert Thomas Mullen in St. Louis to become a jewelry maker full-time. She taught herself how to cut the stones, and after being a vendor at the Arts Council’s 2019 craft show and winning the Best of Show award, she decided to open a brick and mortar shop, Foxy Lady Stuff, in Jackson in November 2020. She found a home for it in the building her grandfather built in 1933, where her father was a chiropractor from the 1970s until his passing in 2005. 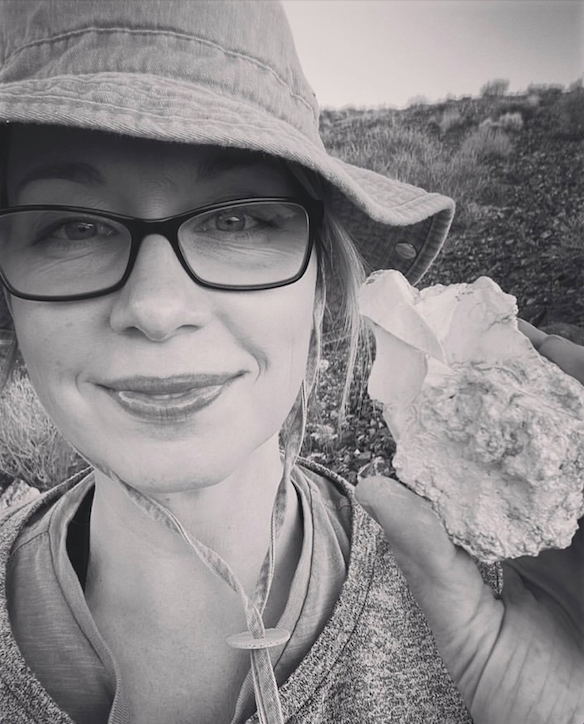 Emily Fox holds up turquoise she mined out West. Fox uses the turquoise to make jewelry at her studio in Jackson. Photo submitted by Emily Fox

Not only does Fox make jewelry, she also travels to collect the sea glass for it. She has traveled to England, where she says they had a bottle making factory from 1820 to 1870; at the end of the day, the workers melted down their mistakes and threw them into the North Sea, and now, more than 150 years later, the glass is ready to be made into jewelry. Fox has also traveled to Hawai’i, Alaska, Puerto Rico, British Columbia and Scotland to pick up sea glass along beaches. She says she loves thinking about what the sea glass was before; white, green and amber are the most common, she says, while red and orange pieces are the rarest. One in every 10,000 pieces found is orange.

The sea glass, which is created by saltwater as opposed to beach glass, which is created by freshwater, is unique in each place, Fox says, and tells about that location: in Old San Juan, Puerto Rico, she says all of the sea glass is green from beer and wine bottles. In Hawai’i, she says she found every color, including orange; red, she says, is often from broken automobile taillights or lanterns from shipwrecks. In England, she found pirate glass, from the sinking of the Spanish Armada in the 1500s, whose cargo was full of black glass. It changes color in the light.

In addition to her fascination with sea glass, Fox says she has loved rocks from the time she was five years old, digging up her backyard. In college, she studied geology for two semesters, although she didn’t think then about applying her interest to jewelry making. Now, Fox gets to put this passion to use each day: She has traveled to Nevada to mine turquoise and to the seven square miles in Oregon to mine at the only place in the world where sunstones have a copper center. She hopes to travel to Montana to mine sapphires soon. 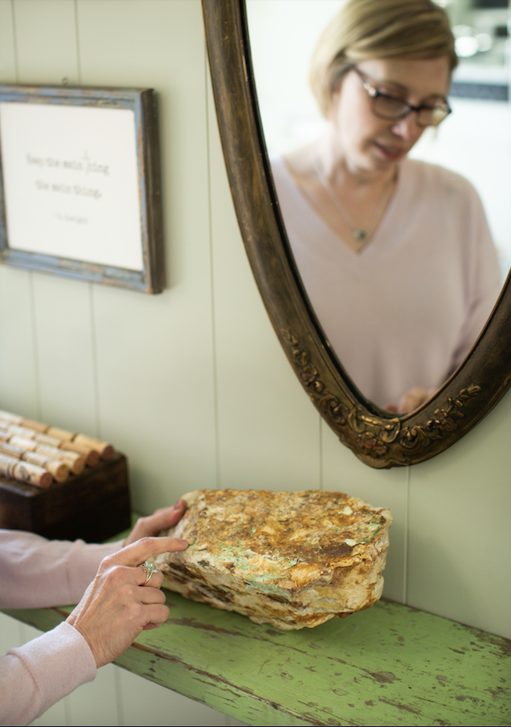 Emily Fox talks about a piece of turquoise in her shop, Foxy Lady Stuff, in Jackson. Fox began making jewelry after finding a piece of beach glass at Lake Michigan in 2017. Photo by Aaron Eisenhauer

Before she knew how to cut her own stones, Fox bought turquoise from a man who was a prospector in the 1970s. He invited her to come to his friends’ mines in Nevada, where he taught her to mine for herself. She says the people who own the mines have already excavated the turquoise, so her role in the process is sifting through and finding it. A claim of turquoise, she says, is 20 acres; even if turquoise is in the same vein, if it’s one foot outside of those 20 acres, it has to have a different name. Fox got to name the Mojito Mine.

“It just completes the story,” Fox says of her mining and sea glass collecting. “I have to do it from the beginning. I have to do the whole thing, or else it’s not really my work, I feel like.”

Fox views designing and making each piece as an experiment; she says for each piece in her shop, there are “50 mistakes that go with it.” She doesn’t make duplicates unless it’s a basic piece of jewelry; each week, she pushes herself to learn a new technique or do something new. People from as far away as Dubai have bought her jewelry.

From mining and collecting, cutting and polishing — also known as cabbing — designing, soldering, setting and chain making, Fox enjoys the freedom of making something with her hands throughout each part of the process. She says jewelry making has made her better and changed her life. She makes what she likes, and she hopes other people like it, too.

“It just opens my eyes up to something — a whole new place,” Fox says. “Whenever I do sea glass pieces, I try to incorporate things about that moment [that I found it] into it. If I can bring it back and share it, then that’s what I want to do.”

Previous Madelyn Hussman: From the Pacific Crest Trail to the Cape Girardeau Studio
Next Pet Peeves: What ticks you off?