meet along the way: Mildred Wilson

This story was first published in the March 2021 issue of “The Best Years (TBY).” 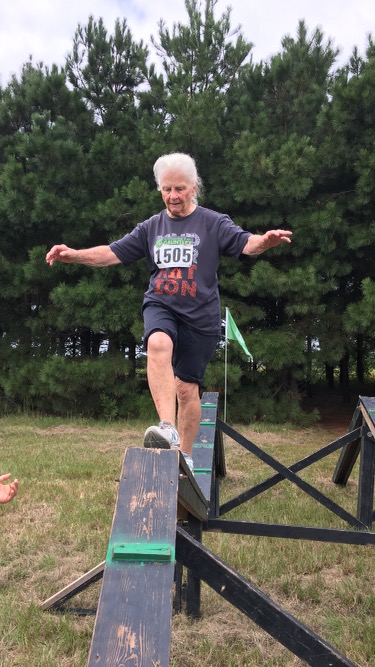 Mildred Wilson of Sikeston, Mo., has always enjoyed physical challenges and competitions. Throughout the past three years, she has competed in a Tough Mudder and a Conquer the Gauntlet race. She knows what it takes to train, endure and finish the race in front of her, letting no obstacle keep her from accomplishing her goal.

Perhaps the most impressive part? Wilson is 81 years old.

Wilson says her son Danny was her initial inspiration to compete in demanding physical challenges: When he asked her to travel with him in 2018 to Las Vegas, Nev., where he competed in an intense 24-hour challenge, she jumped at the opportunity. While cheering her son on, Wilson decided she would like to compete in some sort of physical challenge, too. Knowing the interest his mother had, Danny asked her to train with him for her first Tough Mudder competition in the spring of 2019.

A Tough Mudder competition consists of a series of endurance events with obstacles along a muddy course. Event titles include “The Mudderhorn,” “Entrapment” and “The Funky Monkey.” All events wreak havoc on a competitor’s nerves if fear of water or heights are too much to bear. But not for Wilson — she enjoys the challenge. Wilson says an obstacle in the Tough Mudder that challenged her was a high wall.

“That’s the one that is the hardest of them all,” she recalls. “My son and another guy were standing on the ground, and a woman [was] standing on their shoulders. I’m crawling up her to the top, so it’s a tall wall!”

Wilson ran her second race, Conquer the Gauntlet, Sept. 26, 2020, in Little Rock, Ark. Similar to a Tough Mudder, this race has more than 20 extreme physical challenges and rigorous terrain that participants must climb, run, jump and crawl through. Of course, the challenge of this race was enticing, but this one had more meaning to her than something to do for fun: she ran the race in memory of her beloved husband Farrell, who passed away a month before.

“Farrell would want me to,” she recalls thinking when she made the decision to continue on with competing in the race. “He was my biggest fan.”

While racing in her husband’s memory, Wilson also raised money to help her son Danny’s youth group dig a well in Africa. Although her goal was $5,000, through the help of her supporters, she ended up raising $12,000. Thanks in part to her efforts, the youth group raised more than $67,000, and the well will be dug in Africa.

Competition has always been a part of Wilson’s life: Growing up in a large family including five brothers, she knew how to keep up with the boys in her family. Wilson remembers sacrificing rest so she could be active.

“We lived on a farm, and of course, we had to chop cotton,” she says. “We would come home for the lunch hour and eat real fast, and then we would go outside and play softball with a stick and a ball made out of socks. You would think that after we chopped cotton all morning, we should be resting during the lunch hour, but not us.”

That sense of activeness has stayed with her throughout her life. During some of her working years, Wilson competed in softball, volleyball, tug of war and tennis for eight years with her company’s team in the Sikeston Corporate Games. For the first couple of years, she wasn’t allowed to participate in the games because she was a part-time employee, but she was always there cheering her team on, finding it difficult to sit on the sidelines and watch when she wanted to play.

With her love of competition, Wilson doesn’t have plans to slow down anytime soon: She is planning to compete in another Tough Mudder race this spring with her son. She will officially begin training a couple of months before the race.

Don’t think she will sit around until training begins, though. You can find her staying active playing pickleball at the local gym three days a week. Staying well and enjoying an active life will always be important to her.