meet along the way: Autumn Abernathy

This story first appeared in the May 2021 issue of “The Best Years (TBY).” 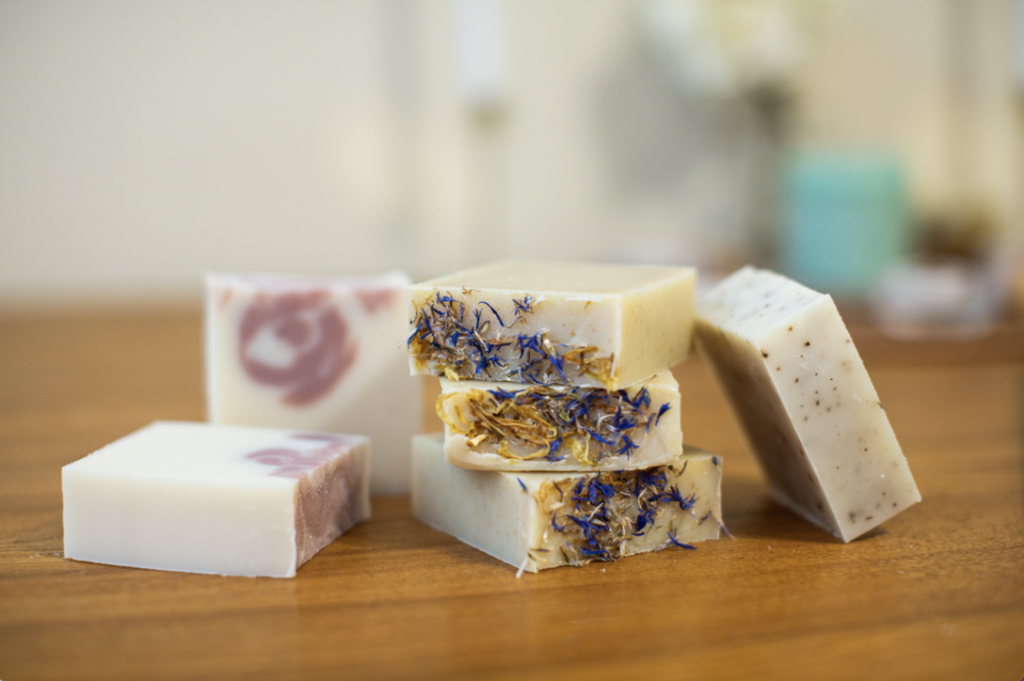 Autumn Abernathy of Jackson was experiencing abnormal headaches, numbness and tingling, and none of the doctors she saw about it could tell her why. Her counselor  suggested she take up an activity she loved to do as a child. Abernathy liked that idea, and it brought her back to soap.

As a child, Abernathy says she loved mixing things together outside in her yard, as well as receiving soapmaking craft sets from relatives for birthdays and holidays. She says this was always a go-to gift her relatives gave her, and her love of these craft sets evolved into experimenting with melt-n-pour soaps as she got older. At her counselor’s suggestion, Abernathy decided to try her hand at soapmaking once again.

A few years later, she was diagnosed with epilepsy, and she found that making soap helped her slow down and focus, giving her a reprieve from the anxiety she experienced as a result of the seizures. In 2015-2016, she decided to pursue soapmaking professionally and founded Little Ant Soap Co., through which she sells soap, lotion bars, candles and more, made with all-natural oils on Etsy and at the Riverfront Market and Hunter Valley Winery in Cape Girardeau, The Ground-A-Bout in Jackson, and Free Spirit Studio in Millersville, Mo.

“It’s kind of therapeutic in its own way,” Abernathy says. “You just kind of sit, and then you measure everything out, and then you pour it. It’s a hurry-up-and-wait sometimes, depending on what you’re making, but sometimes in the most beautiful way.”

The name of her business comes from the nickname “Autumn Ant” her grandma used to call her, a name her siblings, nieces and nephew still call her, which is what helped her decide to use a version of the name for her business. 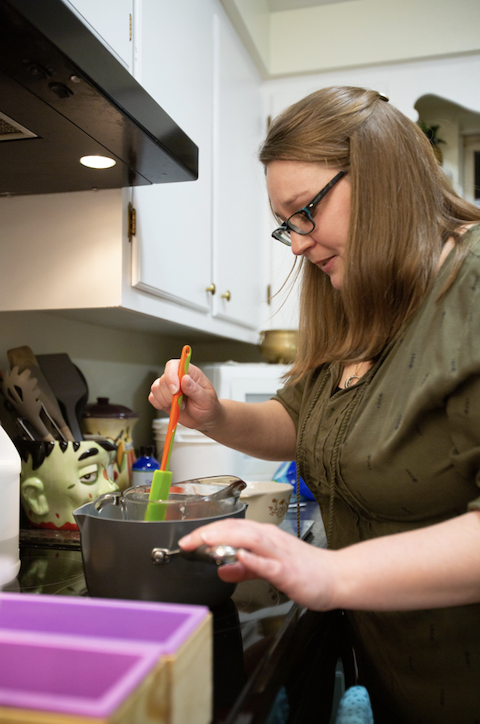 Abernathy perfected her custom-made soap recipe during the winter of 2016. Her general process is to put the lye solution in the bath of water with ice so it can cool down. She lets this sit for 10 to 20 minutes depending on the size of the batch. As this sits, she combines the oils, including sunflower, olive, castor and avocado at room temperature with shea and mango butters. On the stove, she melts the coconut oil and then adds it in with the other oils.

Next, Abernathy uses the cold process, checking the temperature of the oil mixture and the lye mixture; when they are within 10 to 20 degrees of each other, she combines them. She says she likes to soap below 100 degrees because it’s easier to work with at that temperature — as it heats up through the natural saponification process, it is less likely to crack if it starts out below 100 degrees. As she mixes the oils with the lye solution with a hand mixer, she taps the bubbles out. She says it is important not to mix it too heavily so it doesn’t form into a cakey texture; rather, the goal is to get it to a vanilla pudding type of consistency. When she can trace a design over the top of it, she adds in the essential oil and any other decorative elements such as hand-ground oatmeal or lavender. She blends it all together again so the texture becomes a medium-style trace, like a light pancake batter consistency.

Then, it’s time to wait. After a couple of days, Abernathy removes the soap from the molds and cuts it. She lets it cure for four to six weeks to make it more gentle and easier on the skin.

She says timing is the most difficult part of the process.

“Soapmaking is almost worse than baking,” Abernathy says. “It has to be very, very accurate.” 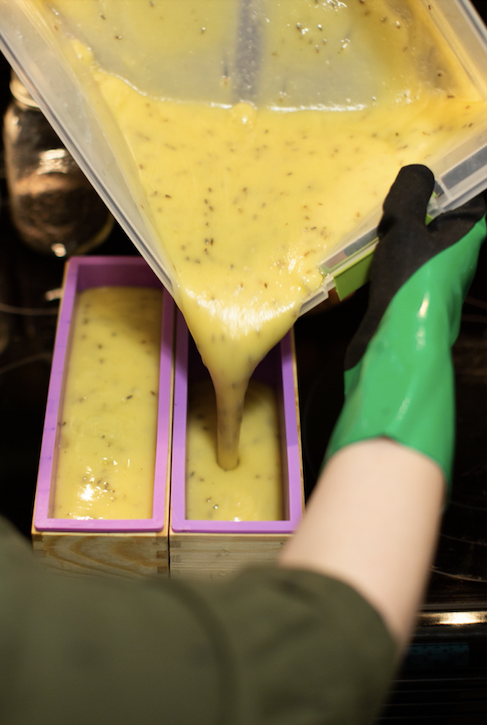 Because of this, she uses a scale for measuring and makes small batches of four to six loaves of soap at a time. Each loaf makes approximately nine bars of soap. She makes two to six loaves of soap every two weeks, along with zero-waste lotion bars, lip balms, solid perfumes, roll-on perfumes, botanical candles and clay facial masks, to name a few of her products.

Abernathy said she wants her soap to not be too harsh while also not falling apart in the shower. She also wants it to bubble and moisturize the skin. To achieve this, Abernathy uses all-natural oils, 100% pure essential oils and many ingredients that are certified organic, although her business is not a certified organic company. She often uses shea and mango butters as well as avocado and castor oils to make the soap bubble and moisturize. She says she uses the best products she can find because it makes a difference in the quality of the product.

Some of her favorite scents she has created include a coconut and lime bar she named “Doctor.” She has also made a custom line of beer soaps in collaboration with Jackson Street BrewCo in Perryville, Mo., which she named by incorporating the name of a beer into a song title. She also loves her dirty chai soap as well as her lavender oatmeal bar because “it’s clean, it’s classic, it’s calming.” In addition, she has made a line of exclusive soaps that have coffee grounds in them for The Ground-A-Bout in Jackson.

For those interested in trying their hand at making soap, Abernathy says research is key.

“There are a lot of things that could go wrong very quickly,” she says. “Make sure you’ve of course got your safety things because you’re going to want to know what you’re doing. Make sure you’ve got the time to do it.”

Because soapmaking is her respite and brings her peace, Abernathy says she usually makes soap on Sundays. For her, it’s an experience that allows her to express herself while doing something she has loved since childhood.

“It’s my church,” she says. “While everybody else is doing the hustle and bustle of putting on their Sunday best, I’m putting on my absolute worst to go do my best. This has become my escape. It was something that found me when I needed it.”

2. Don’t wear anything you love.

4. If you are using sugars or honey, soap at a very low temperature because the sugar heats up intensely and can cause the solution to become volatile.