More Girls on Bikes: Making space for the women

That’s the motto and goal of Girls Riding Together (GRiT), a program created by the National Interscholastic Cycling Association (NICA) specifically for female mountain bike student-athletes. The national organization has chapters all across the U.S., teaching mountain biking skills and the joys of being part of a cycling community to young people ages 12 to 18. When Matt Smith, Mike Higgins, John Dodd, Aaron Arnzen, Reed Gilmore, Alaina Froemsdorf and Monica Foltz founded the SEMO Mudcats chapter of NICA in Southeast Missouri in 2020, coaches Foltz and Froemsdorf stepped up to lead GRiT, creating an inclusive space for girls in the area to feel welcomed into the sport of mountain biking.

Currently, 20% of NICA student-athletes across the nation are female. According to their website, NICA recognizes girls and women often join sports for different reasons than men, especially in sports like mountain biking, in which women are currently the minority. Through creating opportunities for women to feel invited into the sport and to build community with each other through GRiT, NICA hopes to increase female participation in the organization to 33% by 2023.

“It kind of helps boost your confidence, knowing that you can do this stuff,” says Addison Craig, a freshman at Notre Dame Regional High School who joined NICA and GRiT in August and podiumed at four races during the 2021 season. 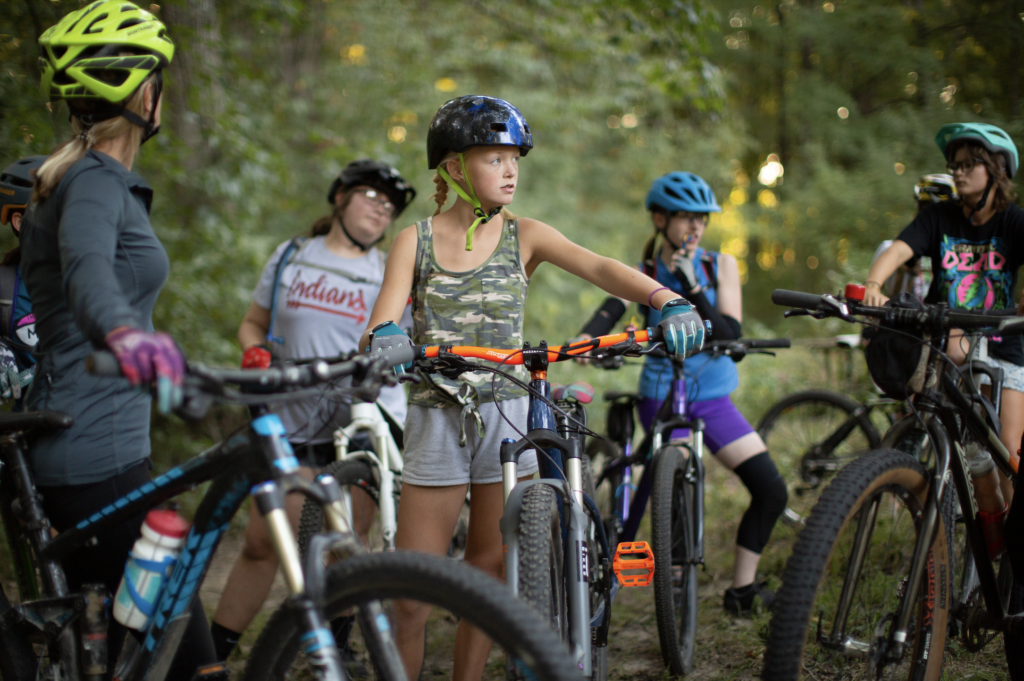 From left to right, Coach Alaina Froemsdorf, Haley Sanders, Brooke Sütterer, Rachel Tucker and Norah Koetting, members of the Girls Riding Together (GRiT) mountain biking team, regroup before their next exercise at Klaus Park. The group is part of National Interscholastic Cycling Association (NICA) and was brought to Southeast Missouri in 2020. Photo b y Aaron Eisenhauer

Craig first got into mountain biking because of her dad, who also participates in the sport. One of the main things she’s learned while being on the team, she says, is how to control the bike when she’s on it, as well as knowing the right speeds to use while navigating a trail. She encourages more people to get involved with the sport because it is “really fun.”

In the past year, the GRiT team has grown from one member to six, from four schools throughout the region. Throughout their season that ran from June through October, they competed in five competitions from St. Louis to Nixa, Mo. At the races, there is a GRiT tent that sponsors activities for female cyclists, such as going on pre-rides to preview the trail together, making jewelry from bike chains and eating snow cones. 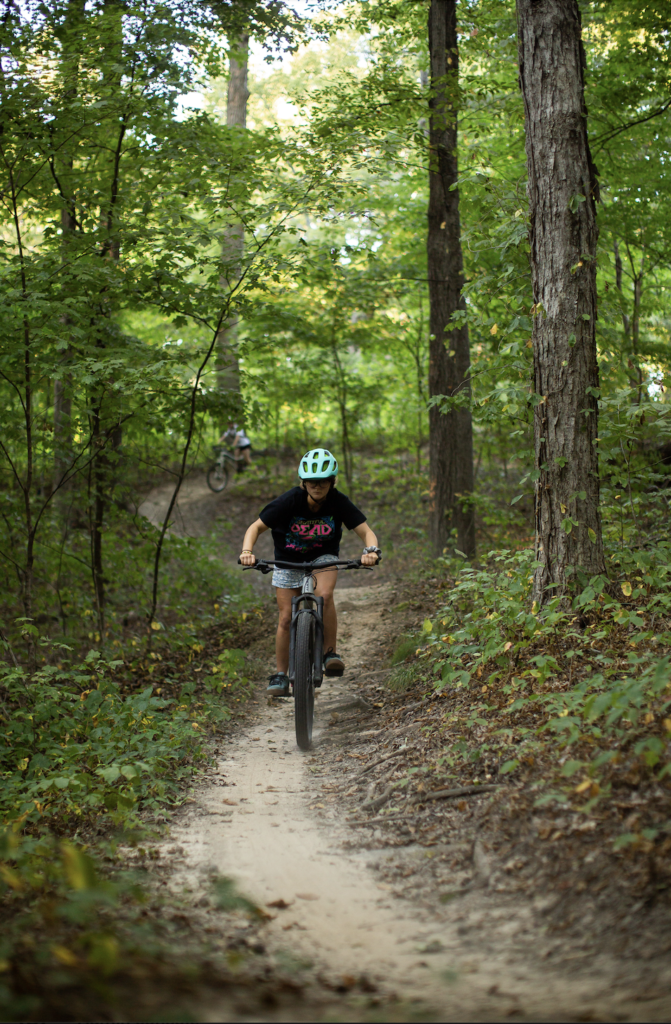 Norah Koetting, member of the Semo Mudcats Mountain Biking Team, rides a section of the trail at Klaus Park during warmups. Koetting is currently ranked second in the state of Missouri for seventh grade girls. Photo by Aaron Eisenhauer

Each GRiT practice starts with warm-ups, stretching legs, arms, fingers and wrists, before the riders do practice laps. Then, coaches work with the student-athletes on skills in small groups before coming back together to practice another set of skills and ride. Since the first core value of the organization is fun, the practices always end with a game.

At the beginning of the season, student-athletes participate in clinics that teach fundamental skills such as how to stand on the bike, where to pass and gain speed on a trail, and trail communication. Throughout the season, members of GRiT also learn skills in safety, trail navigation and bike maintenance, such as how to put a chain back on and check tire pressure.

“The skills are lifelong,” Coach Foltz says. “Taking care of your own bike, knowing what to do on a trail, communication’s a big one. We talk about trail communication a lot, and safety. It’s just empowering.” 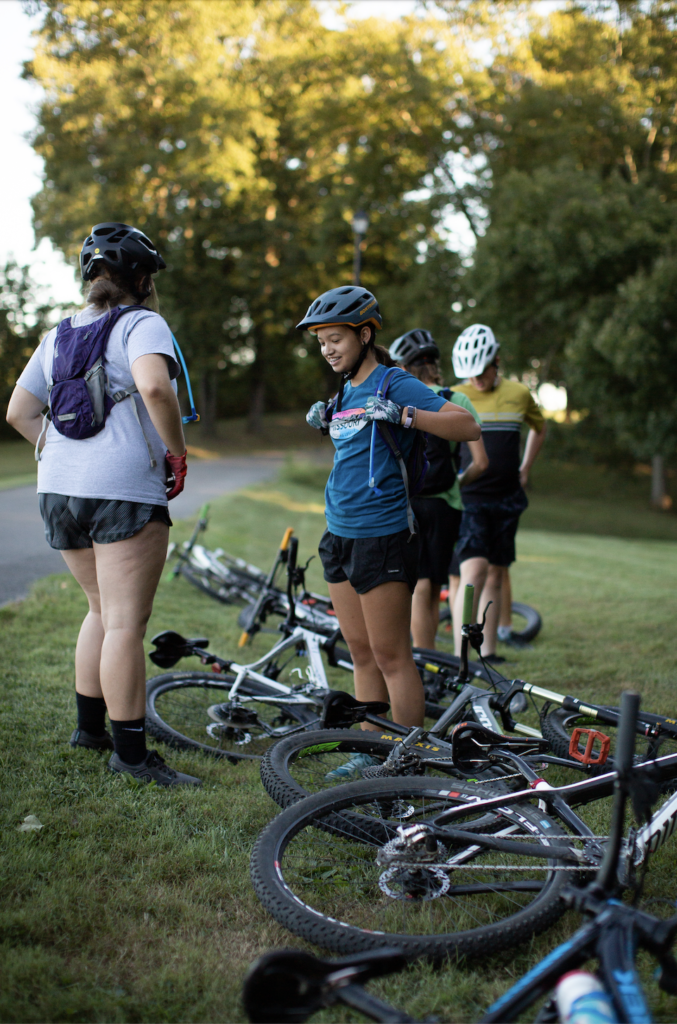 Addison Craig, member of the Semo Mudcats Mountain Biking Team, adjusts her pack before warming up at a GRiT practice. Craig podiumed at all five of the races during the 2021 season. Photo by Aaron Eisenhauer

Foltz says she grew up riding bikes but transitioned into playing the sports offered at her school when she got older. She rediscovered her love for bikes in 2017; when she first started riding mountain bikes, she says she was often one of only three women at local mountain biking events. The desire to introduce more women to the sport and help girls become excited about bikes is what led her to become a NICA/GRiT coach.

“[I like to help girls realize] it’s not scary to be out in the woods on your bike,” she says. “Guys like to go really fast sometimes and take the scarier jumps, and girls have fun in a different way. So, it’s kind of cool to have that mix of energy out there. And some girls love jumps, and some don’t. … I think you create that safe environment, and everyone feels like they can kind of be connected and really learn and grow and flourish.” 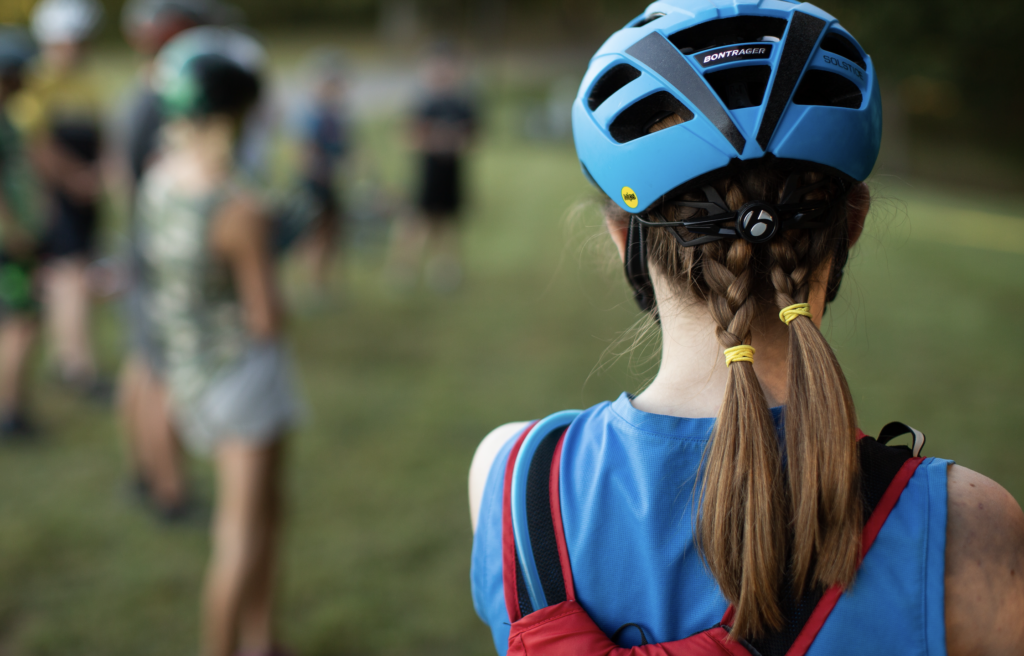 Girls Riding Together, or GRiT, creates a space for girls to learn and compete in the sport of mountain biking. It is part of the National Interscholastic Cycling Association’s (NICA) efforts to raise female participation in the organization from 20% to 33% by 2023. Photo by Aaron Eisenhauer

Coach Froemsdorf also grew up riding a bike up and down her gravel driveway and checking the animals on her family’s farm. The oldest of five children, she says she taught “everybody” how to ride a bike. As an adult, she began road cycling and branched into mountain biking because of her love of hiking and running trails. Her son also races, and now, two of her grandchildren are on the NICA team. She says she enjoys camping at competitions with her family.

“It’s great therapy,” Froemsdorf says. “They’ve had a bad day at school, but then we can get out here and just let it go. Take it out on the trail.”

Haley Sanders, a freshman at Jackson Senior High School who joined the team at its founding in 2020, agrees and says she loves “everything” about being a part of GRiT.

“It’s just fun; I don’t know how else to explain it,” Sanders says. “It’s enjoyable, and it’s like an escape.” 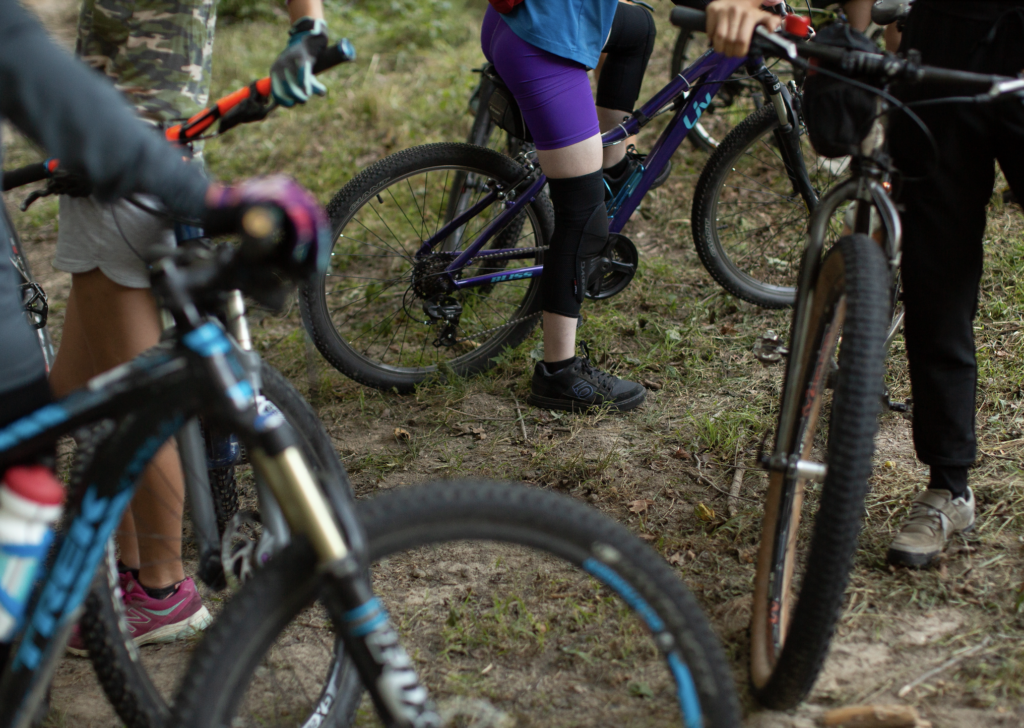 Members of the GRiT mountain biking team regroup before their next exercise at Klaus Park. The season runs from June through October; in 2021, the team participated in five races throughout the season. Photo by Aaron Eisenhauer

Want in on cyclist speak? Here are a few terms to get you started:

Send it: In mountain biking, to go all-in and ride aggressively, especially on a challenging section of a trail.

Session: In mountain biking, to repeatedly practice riding a section of the trail until you can ride it cleanly.

Car up: The expression used when road cycling to announce to fellow riders that an oncoming car is approaching from in front of the group, so all riders are aware.

Car back: The expression used when road cycling to announce to fellow cyclists a car is coming from behind the group, so all riders are aware.

Want to ride bikes with friends?

Check out the Facebook pages for the Semo Mudcats Mountain Biking Team, @semonicamtb, and Chics Dig Bikes, @ChicsDigBikes, to get involved. There’s also a group gravel ride that leaves from the Cape Riverfront Market parking lot at 6:30 p.m. each Tuesday; for more information, check out the Cyclewerx Facebook page, @CYCLEWERX.

Previous Chics Dig Bikes: Get riding.
Next from the editor Winter 2021: space