Kelley and Jeff Branch met in 2010 in downtown Cape Girardeau. Kelley was a senior at Southeast Missouri State University, and Jeff had just graduated. One of Kelley’s best friends worked with Jeff, and they all happened to be at the same place at the same time. It was a Thursday when Kelley’s friend introduced them, and on Saturday they went on their first official date at Bella Italia. They’ve been together ever since.

The couple is passionate about their marriage and has created a family crest that includes an image of a Redhawk, the state of Missouri and the number 28. These images represent the couple: both Kelley and Jeff graduated from Southeast, which brought them from Bolivar, Missouri, and Illinois, respectively, to make their home together in this state. In addition, they were married on the 28th of June and their house number in their address is 28.

Each year during the week leading up their anniversary, the couple holds the “Branch Games.” They play seven games such as pingpong, corn hole and pickleball against one another, one each day of the week. The winner is Branch Games Champ and gets to host the trophy on their respective shelf in their living room for the year.

“It’s a chance for us to laugh, talk smack and be reminded of one another’s strengths and weaknesses,” Kelley says. “At the end of the week, it is clear we are a better team together.” 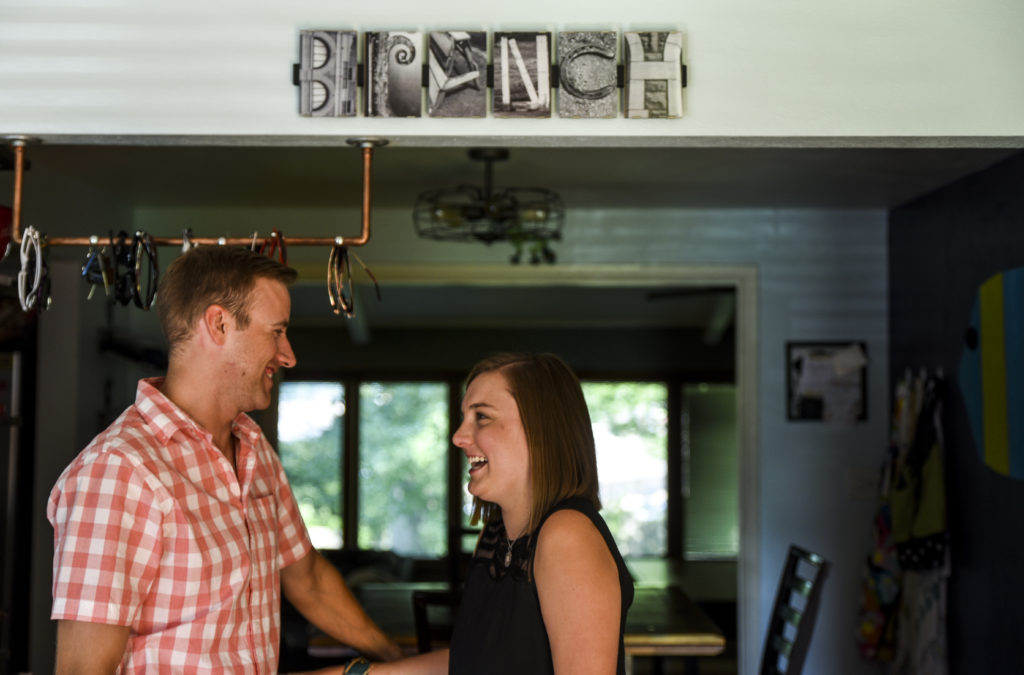 Kelley, who is the STREAM (Science, Technology, Research, Engineering, Arts and Mathematics) specialist at Jefferson Elementary School in Cape Girardeau, says one of the most important things about marriage is being the champion of your spouse.

“We love our marriage,” Kelley says. “It’s my greatest blessing. Anything we do, we do in a partnership. So he takes on some responsibilities and I am in his corner 100 percent of the time, and things that I do, he is in my corner 100 percent of the time. One other thing I really pride myself on — and I know he does the same — is the way we speak about one another when each other’s not around. It is so positive. He is, to me, the best person in the world, so I want others to feel that and see that, too.”

The couple also says protecting their time by carving out days in which they tell others they’re busy so they can spend it relaxing at their home is important to their relationship, as is keeping their home a stress-free zone into which they only allow good things. Jeff says because his job as an accountant for Americare is usually not stressful, he is free to accept the stresses Kelley tells him about, challenges that can come from a career in education. This helps keep their home a positive place.

Kelley also says when in a relationship, it is important to not compare yourself to what people in other relationships are doing. The couple describes themselves as a “package deal,” which Kelley says helps people give their marriage respect.

“It’s never 100 percent perfect or easy, but that’s always one of our goals, to be united,” Jeff says.

Kelley and Jeff cite each of their parents, who have been married for 40 years and 45 years, respectively, as examples to them in “being able to get through anything” in marriage. They say they are blessed to come from this legacy.

The couple also says they complement each other, and this helps them with the projects they take on together in life.

“We always say that Jeff’s the talk and I’m the walk,” Kelley says. “Jeff has all the ideas that get generated, and I listen to all of them. They all cycle through my brain, and the ones that I am really interested in, I give legs to.”