Fred and Helen Moyers have been married for 75 years. Their choice to keep choosing each other is a testament that, yes, love is real. And it endures.

“Do you want to dance, honey?” Fred Moyers asks Helen Moyers in their living room at Chateau Girardeau in Cape Girardeau one muggy afternoon in late June.

Helen agrees, momentarily slipping off her oxygen and joining her hand to Fred’s.

The beginning notes of the 1968 song “Cab Driver” by the Mills Brothers — one of Fred’s favorite songs — come from the record player across the room. The dancing takes effort — the couple is in their 90s and Helen has osteoarthritis — but for 30 seconds, their bodies move in a small circle together, perfectly in time with each other and the music. They are one.

The couple has been married for 75 years and have cultivated a profound respect for each other. It is apparent in the way Helen speaks highly of Fred, the way Fred thanks her for her comments, the way they ask each other to talk about certain parts of their lives when they were apart from each other.

After 75 years together, they are still very much in love.

“We love each other and try to take care of each other and not hurt each other,” Fred says. “We’re always looking for things we can help others with. So it’s a rewarding life that Helen and I have.”

Fred and Helen were high school sweethearts in their hometown of Mounds, Illinois. They enjoyed going to basketball games and dances together, and were each other’s favorite dance partners at a young adult dance club. Fred liked Helen’s red hair and freckles. Helen liked that Fred was a good dancer.

“He was just a good person. Really good,” Helen remembers. “And he was good to me. All I had to do was suggest we should do something, and he listened to me.”

“We did a waltz that we thought was something magnificent,” Fred recalls.

With World War II raging, Fred enlisted in the Army Air Corps. Since he would soon be leaving for training, the couple didn’t have time to wait for Helen to turn 18, the legal age for marrying without parental permission in Illinois. So, on Feb. 6, 1943, the couple eloped to Cape Girardeau, getting married at Grace Methodist Church. Helen was 17; Fred was 19.

Ronna Moyers, the couple’s daughter-in-law, says Fred and Helen have told her Helen cried when she first told her mother about their elopement, because she felt guilty for not telling her beforehand. Helen’s father told her, “It’s too late to cry now.” When Fred told his mother, she said she already knew — she’d found the marriage license in a drawer.

The newlyweds corresponded while Fred was deployed, writing letters back and forth to each other once or twice a month. Although Fred says he “wasn’t much of a writer,” Ronna says Helen once told her Fred would write in his letters for Helen to look at the moon at a certain time of night — he would be looking at the same moon then.

Emily Jiran, Fred and Helen’s daughter, still has the letters Fred wrote to Helen during this time. Helen, however, smiles sweetly as Emily explains that Helen burned all the letters she wrote to Fred while he was in the service. Some things are too sacred to be shared. 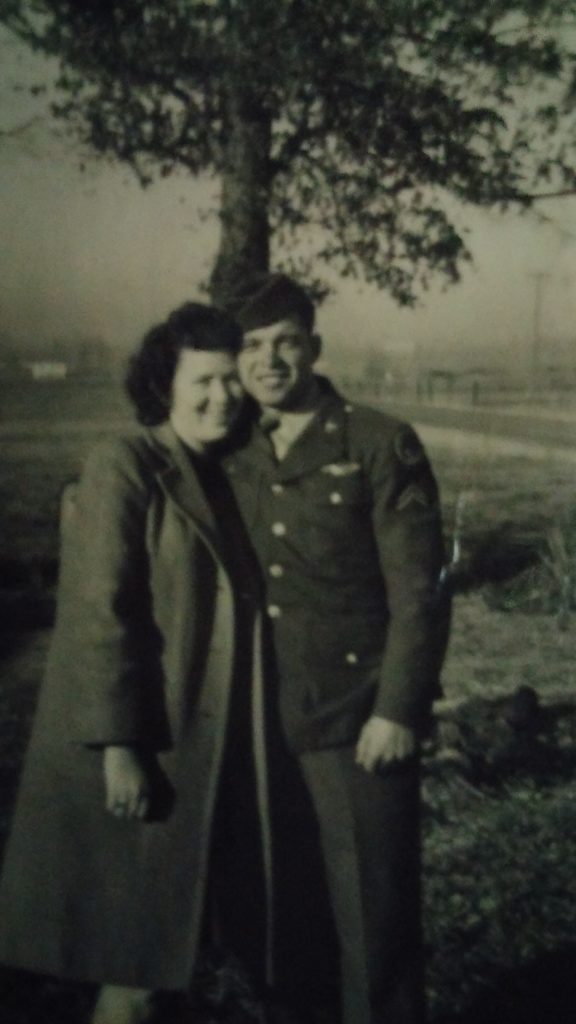 He was a POW; she was strong

Helen was a war bride; Fred was a war hero. Fred’s time in the Army marked a period in the couple’s life that took faith for both Helen and Fred.

Fred was inducted into the Army Air Corps on March 2, 1943, less than one month after he and Helen’s wedding. Trained as an engineer and aerial gunner, he left the country for England in May 1944, joining the 9th Air Force 394 Bomb Group, 587 Bomb Squadron to prepare for the Normandy invasion. He participated in D-day on June 6, 1944, and took part in the Battle of the Bulge from December 1944 to January 1945.

On his 45th mission in February 1945, his B-26 took a heavy barrage of ground fire. At the last moment, Fred found his parachute in a far corner of the plane, put it on and jumped. It was the first time he’d ever jumped out of a plane.

Fred doesn’t mention that he helped the other men who were “pretty shot up” out of the plane first; Emily interjects this information. He does, however, vividly recall his own exodus from the plane.

“I jumped out of the plane and left the plane and finally it dawned on me, ‘Hey Fred, you’ve got to get that parachute open,’” Fred says. “So I tore the parachute open and nothing happened for a few minutes and then all the sudden here come a parachute above me, silk, and slowed me down. I remember hitting the ground pretty strong and there was an old man with two oxen ploughing along and he seen me and he just kind of said hi. I landed pretty close to him, and he just kept right on ploughing, didn’t worry about me.”

Fred had landed in Emmerick, Germany, in enemy territory.

He was taken as a Prisoner of War (POW), for two and a half months. Helen received a telegram from the War Department stating the news.

“Yeah, that was pretty hard to take,” she recalls.

Although many people assumed Fred would never come home, Helen stayed strong. One day, while living with her sister, she received good news. The mailman, who had already opened the v-mail because he knew it contained news of Fred, ran up the steps of the house excitedly. Fred’s letter said he was safe in France, in Allied hands. Helen, her sister and the mailman did a victory dance right there on the porch. 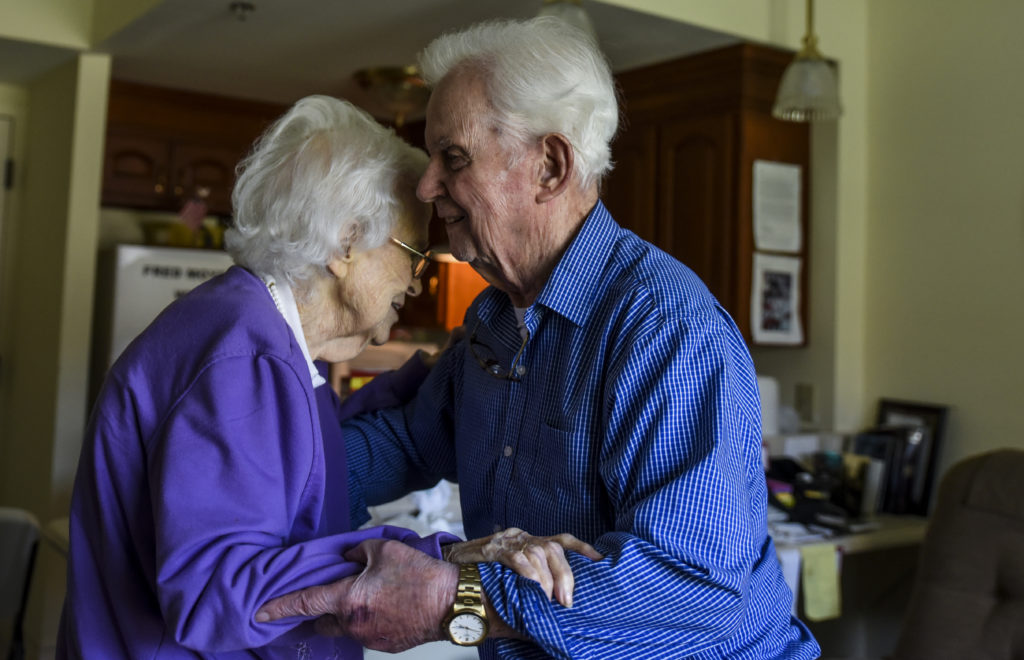 Maybe dailiness is what really matters

As a POW, Fred was continually marched around the countryside; he was liberated by Gen. George S. Patton on April 29, 1945, and honorably discharged from the Army on Oct. 7 of the same year. Upon his return to America, he and Helen bought a house in Mounds for $2,000 and raised two children, Emily and Brian. Fred worked at White Coleman Mill and Lumber Yard in Cairo, Illinois, for a decade, at Union Carbide in Kevil, Kentucky, for 12 years, and then as the circuit clerk for Pulaski County until his retirement. Helen worked as a stay-at-home mother until Emily was in the fourth grade, when she opened Helen’s Dress Shop, later becoming the secretary for Fred at the circuit clerk’s office. The couple was active in their church and enjoyed dancing and golfing together. One summer, they took their church’s youth group to Mexico to build a basketball court at a mission. They looked for ways to help others around them, and continue to do so.

Their children say they have learned patience from the couple.

Ronna says Fred and Helen are servants, and that this is their “whole life purpose, they have felt.” The couple has always had a devotion, spending time together each morning in prayer.

Fred attributes their ability to make it through difficult times to their faith.

“We’re pretty close to the Lord in beliefs and everyday things that we do,” he says. “We depend on the Lord to guide us and stand by us and walk with us.”

With 75 years together and counting, Fred and Helen’s commitment to each other is a testament to enduring love. As the couple sits together on their couch, Fred looks at Helen and then back at their children and daughter-in-law.