Drums are loud. They are visual. They are large and cumbersome, and they keep the band together. Historically, they are a male-dominated position within the band.

But the Perryville High School Marching Buccaneers Drumline in Perryville, Mo., is changing that. During the 2021-22 school year, the drumline has been comprised of all female drummers, and for the 2019-20 and 2020-21 school years, the drumline was majority-female. It’s something the percussionists say, even in 2022, is not common in other marching bands they encounter at competitions and parades throughout the region.

“They’re our heartbeat,” Taylor Davis, colorguard coach, says of the drumline. “They’re the heartbeat of the band.” 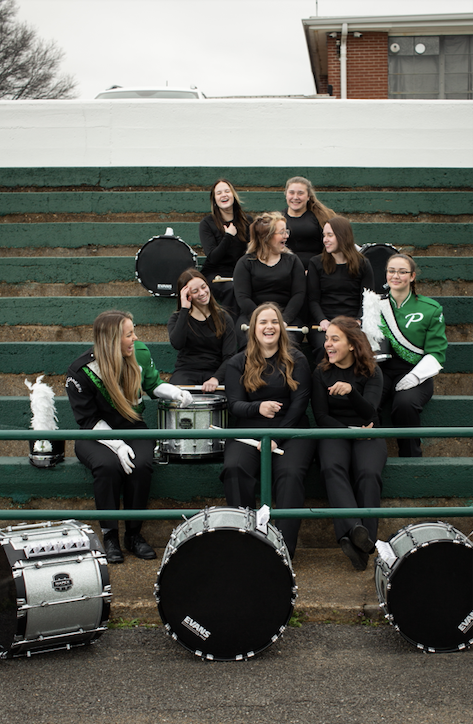 None of the 10 women on the 2021-22 drumline began their involvement in the band as percussionists; initially, they played wind instruments. In 2019, when five of the members of the drumline graduated, directors Jerry Childers and David Barani opened drumline auditions to any student interested in learning to play percussion instruments, since they needed more students to fill the roles. That year, some of the current drumline members decided to learn how to play the drums and auditioned for the drumline, earning spots as percussionists in the band. Each year since, more women have joined the group.

The students “practiced nonstop,” junior marching snare player Megan Kluender says, to learn how to play a new instrument, as well as how to move their hands and feet at the same time, so they could march and play simultaneously. Kluender says she practiced at home, during lunch and during band class.

“I was really excited, because I’ve never done anything like that before,” sophomore tenors player Anna Abbott says of playing the tenors. “It’s like the most complicated drum. I didn’t think I was going to be able to do it, but here I am.”

Not only is the drumline all-female, but the band has been led by women for the past three school years, too; Delainy Napier and Sam Yamnitz were the drum majors for the 2021-22 school year. They say this, too, is not common; most schools have one boy and one girl who fill the roles of drum major. 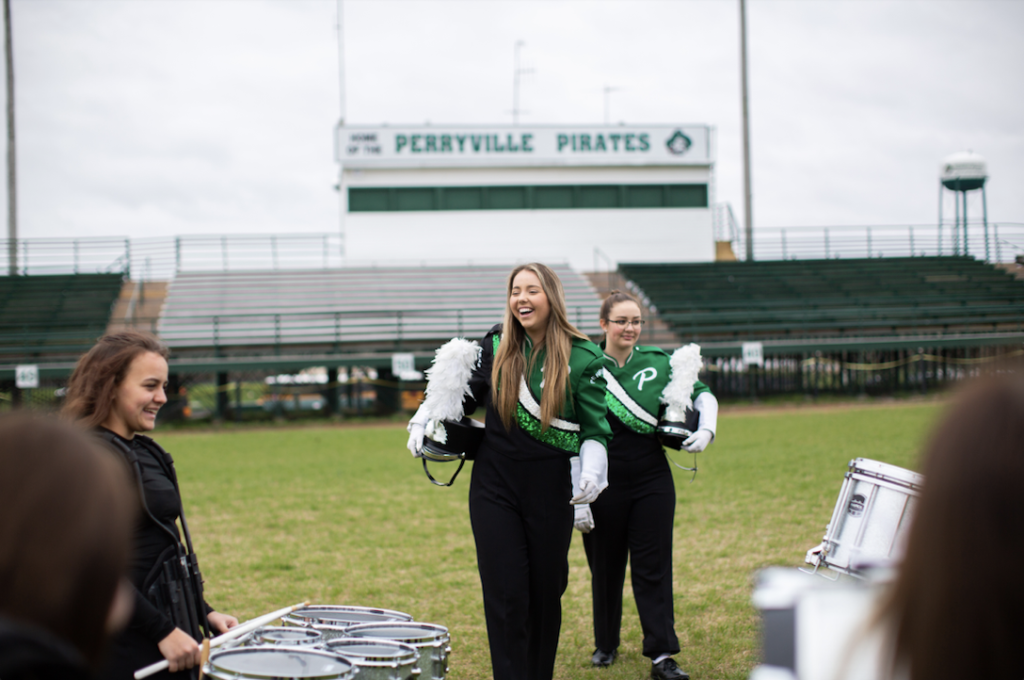 The band competes in four competitions during marching season each fall. In addition to practicing each morning during the all-band practice, the drummers go to the band room each day during lunch to practice, as well as during their free time if they have it throughout the school day. Next year, they will also begin a mandatory hour-long practice one day each week after school.

Their hard work is paying off: The drumline won “Outstanding Percussion Performance” in the White Division at the Music on the Meramec Marching Festival in Fall 2021, and the entire band won first place in the White Division. The band also won third place in Class IV at the SEMOBDA Marching Competition and third place in Class IV at the Ste. Genevieve Marching Festival. At the Missouri State High School Activities Association (MSHSAA) Solo and Ensemble Contest this spring, some of the drummers played in percussion quintets that received a “Gold” rating at the district level, allowing them to advance to the state contest.

At competitions, the drumline says students from other schools tell them the drumline is cool and cheer for and support them — Abbott says walking through the gate at competitions feels like they “are in a movie” as they carry their drums. Sophomore fourth bass player Libby Reed says students from other schools are often surprised when they see an all-female drumline and ask about it before telling them it’s “so cool.” Napier says there is a similar reaction from many students about having two female drum majors.

“It’s kind of cool in an empowering way,” Napier says. “Nobody expects it, and it’s the best thing ever.” 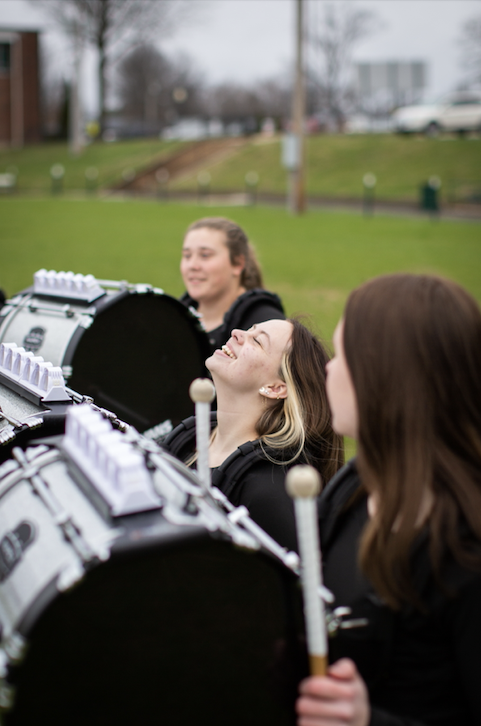 Taylor Greer laughs while waiting to begin playing the cadence as Julie Morris looks on. The drumline won “Outstanding Percussion Performance” and the entire band won first place at the Music on the Meramec Marching Festival in Fall 2021. Photo by Aaron Eisenhauer

Kluender says she enjoys how the drumline works together and has “a really good time” when they’re together. Although there are moments when they disagree, she says they always come together at the end of the day to make their practice and performance the best it can be. Reed describes the drumline as a “little family;” before competitions, they “take forever to get ready,” do each other’s hair and carpool to eat together at Hoeckele’s, a local bakery and restaurant. If one of them is missing — especially a member of the bass line — sophomore fifth bass player Taylor Greer says it is difficult to play and makes “a huge difference.”

Greer makes the point that although they have smaller bodies, they are carrying the same-sized drums as their male counterparts on other drumlines. Abbott, who is 5’1” tall, says it is sometimes difficult for her to march fast enough while carrying the tenors, since her legs are shorter than many drum players’. Reed says although it’s sometimes nice to accept help from her bandmates who offer to help her carry her drum and equipment because it is heavy, it’s also empowering for her to carry it herself.

Throughout the year, Reed says she gained muscle from marching with her drum.

“My arms and back, they’re strong,” Reed says. 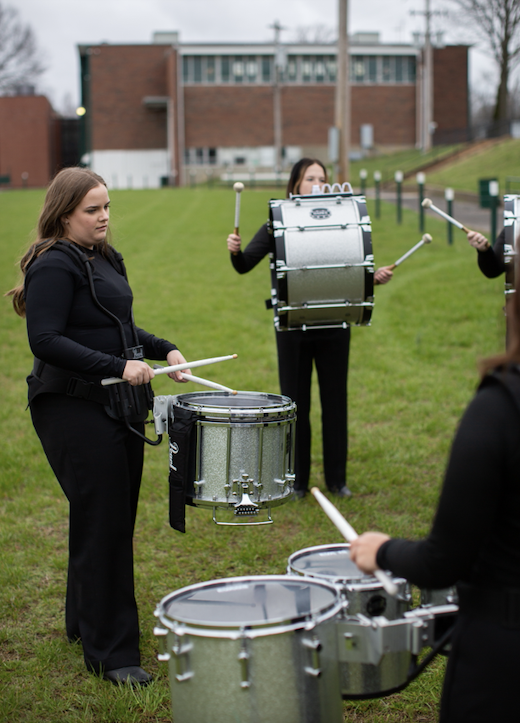 In addition to being on the drumline, the women are involved in versatile school activities: Greer and Reed are also cheerleaders, and during football season, they marched in their cheerleading skirts while they played drums during halftime. Junior drumline captain and marching snare player Breanna White and junior third bass player Julie Morris are on the Perryville High School softball team and once had to march in their softball uniforms during a pregame show because they didn’t have time to change into their band uniforms in between their softball game and band performance.

Before playing the cadence for the football team to run out to at each football pregame show, Morris says the football players jumped up and down getting “hyped” for the game and also cheered for the drumline in order to hype the drumline up, too. Napier says this was the first year since she’s been in high school she felt the student section at football games had “a lot of school excitement about band,” which encouraged the band members.

The drummers say being in band has enabled them to learn how to communicate effectively and build friendships with people they wouldn’t have otherwise known. And through defying gender norms, they have obtained the boldness to overcome fear and go for what they want in life, as well as gained confidence in who they are, what they are capable of and the belief they belong wherever they want to be, paving the way for other women to do the same.

“I just love it, and so, it’s really cool that we get to be the change in a movement,” Napier says. “This drumline proved that women and men are equal, and they can do the exact same thing, and we definitely broke a norm, and so my biggest thing would be, [if you want to do something that goes against gender expectations,] … just take a step and do it.”

Previous Art for You: Purple Sun
Next from the editor: movement, Summer 2022