Moments with Mom in the Kitchen: Remembering my mom through recipes passed down through generations

I was around 10 years old when my mother decided to make the Thanksgiving cornbread dressing from scratch, instead of making Stove Top. I remember the moment she realized she didn’t know how to make it, though, and started flipping frantically through one of the three cookbooks she had: “Aunt Bee’s Mayberry Cookbook,” “Sylvia’s Soul Food” and “Better Homes & Gardens New Cookbook.”

“NO! None of these are right!” I remember her saying. “This one doesn’t have onions. This one has raisins, and your grandma would just roll over in her grave … and this one sounds like it will be dry!”

My mom had a few go-to meals, easy to make and not time-consuming, and she didn’t go outside of that box much. But there were always more veggies than there were carbs, despite them being canned and/or out of a box. Fresh veggies were for holidays, so she taught me the difference between dicing and chopping, because “no one wants to bite into big chunks of onions in the dressing.” And after dicing, I would sauté the onions, creating an aroma that never fails to take me back to some of the best days of my childhood.

Her best friend at the time had a box of family recipes. Her family had been preparing the same dressing for generations, and starting that year, my family adopted this same recipe. The dressing was the highlight of the holiday dinner, so I wasn’t old enough to be entrusted with preparing it alone, but it became my sole responsibility to make sure the sacred index card she wrote the recipe on always made its way back to one of those cookbooks. It didn’t matter which one, because she wouldn’t remember and would always check all three.

I wish I’d known she would be diagnosed with Alzheimer’s disease a couple of decades later. I would have taken my appointed duty more seriously and still have those books and that card today. I can buy old copies of those books, and I probably will, but I’ll never be able to make anything just the way she did.

According to the U.S. Census Bureau, female chefs made up only approximately 24% of the professional food service space in 2019, despite being trailblazers in home kitchens for thousands of years. My mother surely wasn’t a professional, and my grandmother didn’t leave recipes behind, but they cooked with love, and everything was always delicious.

“Let the cornbread cool first, so you don’t burn your hands when you crumble it. Gotta be patient,” my mom once said.

Now, I make my mom’s dressing from memory, but I’ve learned in the hardest way possible that memories fade and won’t last forever. Family recipes, church cookbooks and handwritten recipe cards allow us the space to remain connected to the women before us who pioneered some of our favorite dishes and memorialized culinary perfection as recipes, ensuring delicious dishes would be enjoyed for generations to come.

Yameka Robinson, owner of the local Madi’s Kitchen Food Truck, told me why she’ll be passing down her recipes.

“I’ve been cooking since I were 6 years old,” she says. “First dish I learned to cook was cast-iron fried chicken by my Uncle Henry, [and then] cornbread by my Uncle Jimmy and chicken and dressing by my mom Larcene. I remember standing on a crate in the kitchen making these dishes. Now, we create dishes and intertwine the new with old recipes passed down from my mother and uncles.”

Food ties us to our traditions, cultures and geography and captures our history in step-by-step directions and ingredient measurements. Recipes are reflections of both the past and the present, as they can transcend time and the technological advances of our kitchen appliances. We protect them, encapsulating them in card boxes or within the bindings of handy cookbooks we turn to in the midst of Thanksgiving turmoil. They attach us to the hands that kneaded, flipped and stirred before us and remind us to boil the water before adding the noodles. Food brings us together during our best and worst times, and a recipe is a photograph of the occasion.

Cookbooks will still be there when we start to forget the ingredients and even when we can’t remember the perfect temperature to keep the chicken juicy when it’s done baking. I’m a vegetarian now, so the cornbread dressing recipe has changed for my family, but one thing is for sure: I’m going to write it down on a recipe card. 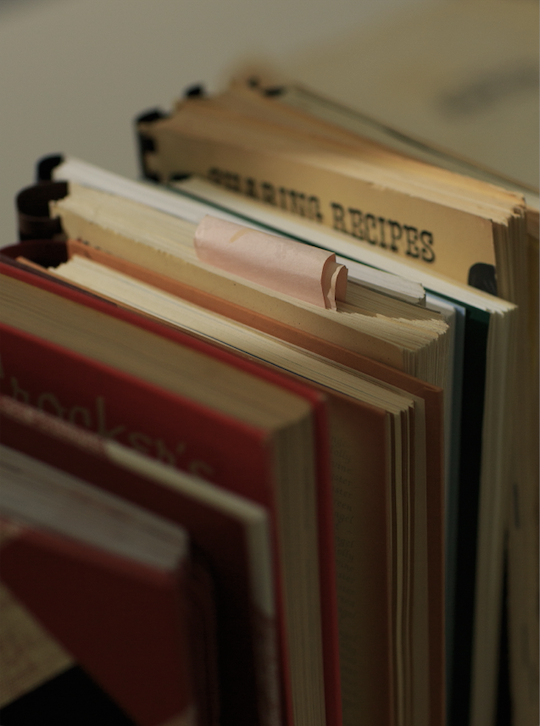 Cream of celery soup (1 can)

4. Crumble cornbread by hand and mix together until you no longer feel large chunks.

6. Add one can of creamed soup and one can of veggie stock. Mix and repeat until all wet ingredients have been mixed thoroughly.

7. Season to taste with ground sage, salt and pepper, and pour into large baking pan.

8. Mixture should be smooth and moist, but not runny. To test, pick up the pan and gently rock side to side. Mixture should move in pan, without excess moisture pooling on the sides.

9. Cover and bake at 350 degrees until nearly done (about two hours). Uncover for last 30 minutes until browned and done. Test with a butter knife by inserting the knife into dressing. Dressing is done when the knife comes out clean.

Previous meet along the way: Hannah March Sanders
Next Traveling Through Words: Reading a book from every country in the world