meet along the way: Georganne Syler

This story was first published in the May 2022 issue of “The Best Years.”

Georganne Syler has attended the First Presbyterian Church in Cape Girardeau her entire life and currently serves as an elder. Decades ago, her mother, Dorothy Penzel, was one of the first female deacons and elders at the church.

When the First Presbyterian Church put together their 175th Anniversary Cookbook, “A Ringing Legacy of Recipes,” Syler and her sister, Carolyn Ford Bock, submitted multiple recipes in honor of their mother. The decadent and easy-to-make chocolate cherry cake was one of the recipes submitted to honor their mother, whom Syler describes as a “foodie.”

First Presbyterian Church of Cape Girardeau resides in the heart of Downtown Cape at 225 Broadway St. The church was first organized in a private home on March 1, 1835, and the first church building was built in 1854, only 42 years after the city of Cape Girardeau was founded.

The church’s cookbook was named “A Ringing Legacy of Recipes” after its historic bell, acquired in 1855. At one point, the 1,400-pound bell was used as the town’s fire bell, with a different ring for each of Cape Girardeau’s four wards, depending on the fire’s location. Syler says the church cookbook is a way to honor the past and support the future of the congregation.

“It’s telling the history [of the church], and it’s telling the fellowship, ‘cause food always means fellowship; they go hand-in-hand,” Syler says. “[There’s] nothing like your church suppers, your church lunches, that kind of thing. [There’s] a lot of good eating in virtually every church.”

Syler says she grew up surrounded by “good eating,” as her mother was always in the kitchen experimenting with new foods. Before becoming a mom, Penzel traveled across the country as a medical technologist and was exposed to a variety of cuisines and flavors. Penzel used her knowledge of cuisine to cook for her family once she became a stay-at-home mother.

Syler says her mother traveled to St. Louis to purchase avocados, yogurt, tortillas and other foods not available in Cape Girardeau in the 1950s. When her mother prepared meals, Syler says she was always by her side — watching, listening and soaking in every lesson her mother taught her.

“I learned so much from her. … You’d be cooking, but she’d be telling you character-building stories and morality issues and spiritual stories. That time in the kitchen for me — and it still is — is a time of communication and support,” Syler says.

The chocolate cherry cake is one of Syler’s mother’s later recipes. It is created to be a simple recipe, using only a few ingredients, with minimal preparation.

Syler is a dietician, and also worked for Southeast Missouri State University as an associate professor of human environmental studies until her retirement in 2012. Before pursuing dietetics and a doctorate in community health, she studied home economics and worked as a teacher in the North Kansas City and Jackson R-2 School Districts.

She says the reason she became a home economics teacher was due to her mother’s admiration for her own teachers. Syler says her mother thought her home economics and family and consumer sciences (FACS) teachers “knew everything.”

The recipes in the church cookbook are not the usual recipes Syler gravitates towards, but she says the memories and nostalgia associated with the recipes are what make them special.

“These older church cookbooks are very much looking back again at a legacy of recipes, as well as current recipes of that time,” Syler says. “It’s not the same kind of thing [as a modern cookbook]. It’s a memory of [the church], it’s nostalgia, but it’s also honoring.” 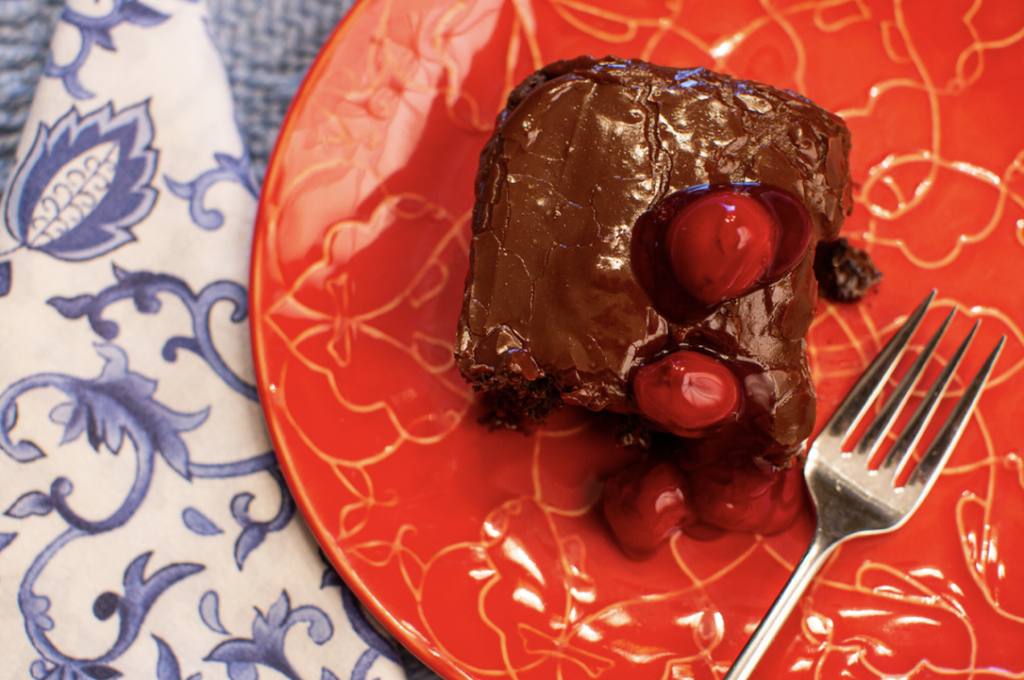 In a large bowl, combine cake mix, pie filling, almond extract and eggs. Pour into a 9 x 13-inch prepared cake pan and bake as directed on the cake mix box.

While the cake is still warm, bring the sugar, milk and butter to a simmer in a saucepan until the sugar dissolves. Remove pan from heat and stir in chocolate chips. Pour over the cake! YUM!