Meet Along the Way: Jamie Mayfield

This story was first published in the January 2022 issue of “The Best Years (TBY).”

It’s 9 a.m. on a Friday morning, and Jamie Mayfield is connecting with people from across the country and world via Sock TV, her YouTube program through which she teaches people how to knit using the Tru-Knit knitting machine she designed. Through the show, she has built a community of approximately 1,000 subscribers from all walks of life and geographic regions who love to knit.

“My passion is teaching,” Mayfield says. “Making and selling machines and teaching. It’s just what I was made to do.”

On this particular day, there are 130 people watching the show live. Joking with her slightly Southern twang as she pokes fun at herself for her age and then corrects herself, making playful jabs at Ron Duff, videographer, about his age, she demonstrates how to knit a Christmas ornament. Joyce Stearnes, assistant, is off-camera and helps her interact with viewers, keeping track of the questions they ask and sharing them with Mayfield so she can answer them.

It’s episode 253 of a production that began 11 years ago when a local machinist, the late Pee Wee Erlbacher, reverse-engineered an antique circular sock knitting machine from the early 20th Century. It’s a machine Mayfield says became popular after World War I, as soldiers abroad needed socks to keep their feet dry and warm. Mayfield says when she first used the machine in 2011, something clicked for her, and she realized she had a talent for it. They began producing the machine at Erlbacher Gear and Machine Works in Cape Girardeau, and Erlbacher asked Duff, owner of Ron Duff Video Productions, to get involved. Duff created the live YouTube series, with Mayfield as the host. 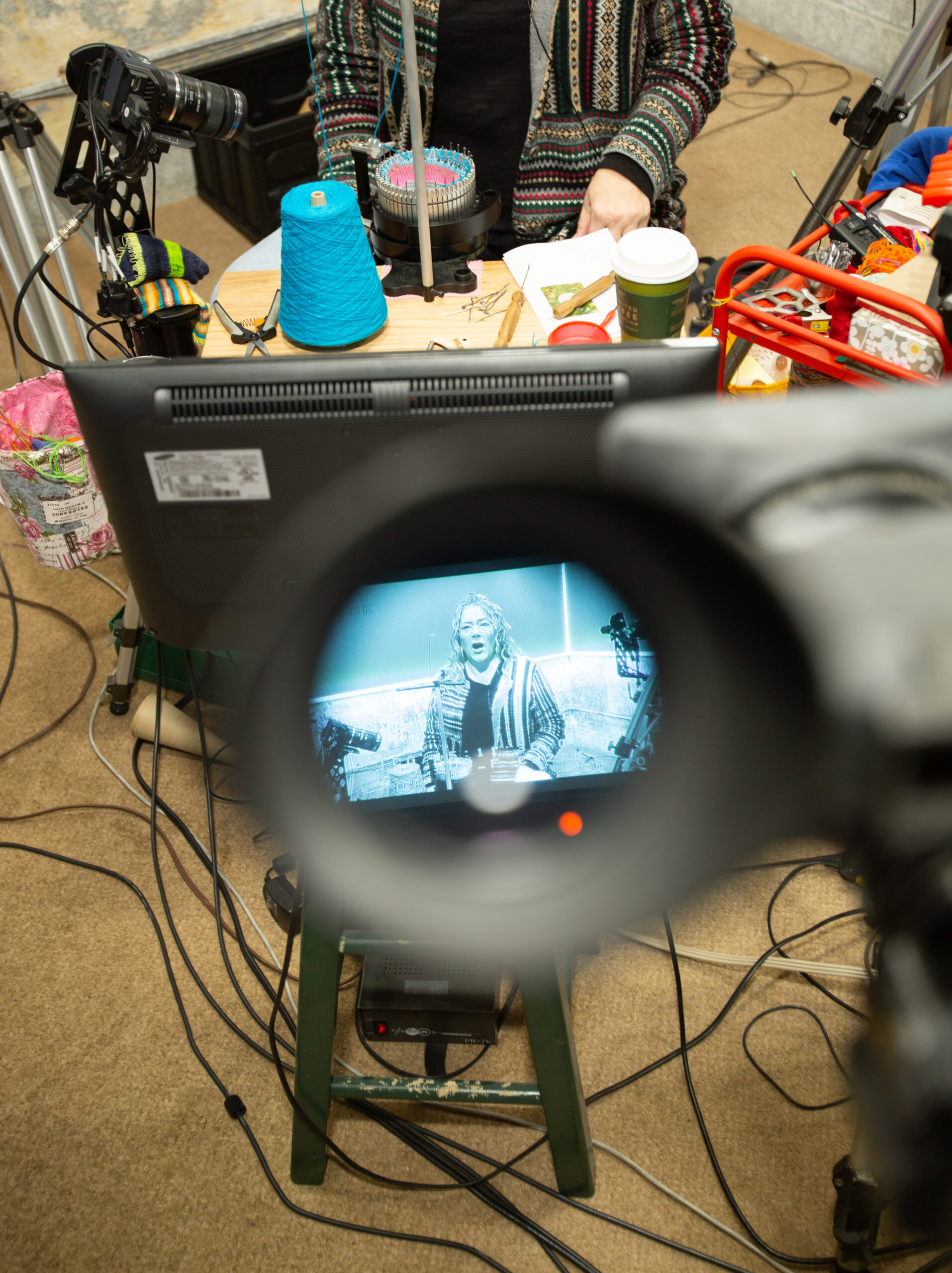 Jamie Mayfield is visible in the viewfinder of a camera as she speaks to the audience during a livestream of Sock TV, a regular series where she offers instruction on using the Tru-Knit machine. Photo by Aaron Eisenhauer

Duff says the show started with a single camera angle, and the first episode, which wasn’t live, took a month and a half to complete. Throughout the years, Duff has added five cameras to the set so he has a total of six camera angles to choose from as he films, enabling them to film the show live each week. On each episode, Mayfield demonstrates how to make a pattern or do something different with the circular sock knitting machine.

“We started with what everybody else was doing, just a single angle. And it wasn’t getting us anywhere for live [programming], because we couldn’t really show [what she was doing]. Big thing about the show and the cameras is trying to stay one step ahead of her, because she can block me [with her hands as she’s using the knitting machine]. The minute she blocks me, the viewers are out of it. They can’t see it,” Duff says. “That’s why you’ve got to have more than one camera. And not only that, [I’ve] got to know what she’s doing, understand why she’s doing it. … It’s understanding what it takes to get from one move to the next, and that took a while to figure out.”

Mayfield now sells yarn on cones and makes wooden tools for the machines, to provide people with the proper tools for using the knitting machine. She debuted her own design of the knitting machine, the Tru-Knit, in October 2021, working with a machinist in Troy, Mo., where the machines are manufactured, for two years from design to completion. Her design is made of stainless steel and aluminum so it won’t rust. This also makes it lightweight, allowing it to be easily transported to group knitting socials called crank-ins around the country. She also added several components into the design that help the machine run smoother. After persevering through a lack of materials due to COVID-19, she now sells the machines.

Stearnes, who learned to use a knitting machine in 2015, knits and sells socks with Mayfield under the name Sole Sisters. She says the pastime renews her.

“It’s therapy,” Stearnes says. “Everybody needed an outlet with Covid … but even before Covid, it’s just — it’s relaxing to me. Accomplished.”

That is, perhaps, what other members of the Sock TV community find, too, through the machine and the programming: the warmth that comes from doing something well.

“We have built a community of like-minded people that it does not matter what your religion is, it does not matter how you vote or what your finances are. It doesn’t matter. What matters is we share this in common,” Mayfield says. “It’s a nice community. We lift each other up and celebrate successes. We share with the bad things that happen.”

Mayfield says her passing of knowledge about the machine to others is one of the most important parts of Sock TV and its community. It is something she loves to do.

“It’s really fun when you get to make your living doing what you love,” Mayfield says. “It’s my gift from God. … When you find your passion, you’ve got to just go with it.”