Here, Tiffany Brown and Mi Hoang show us how they do, so we might, too. 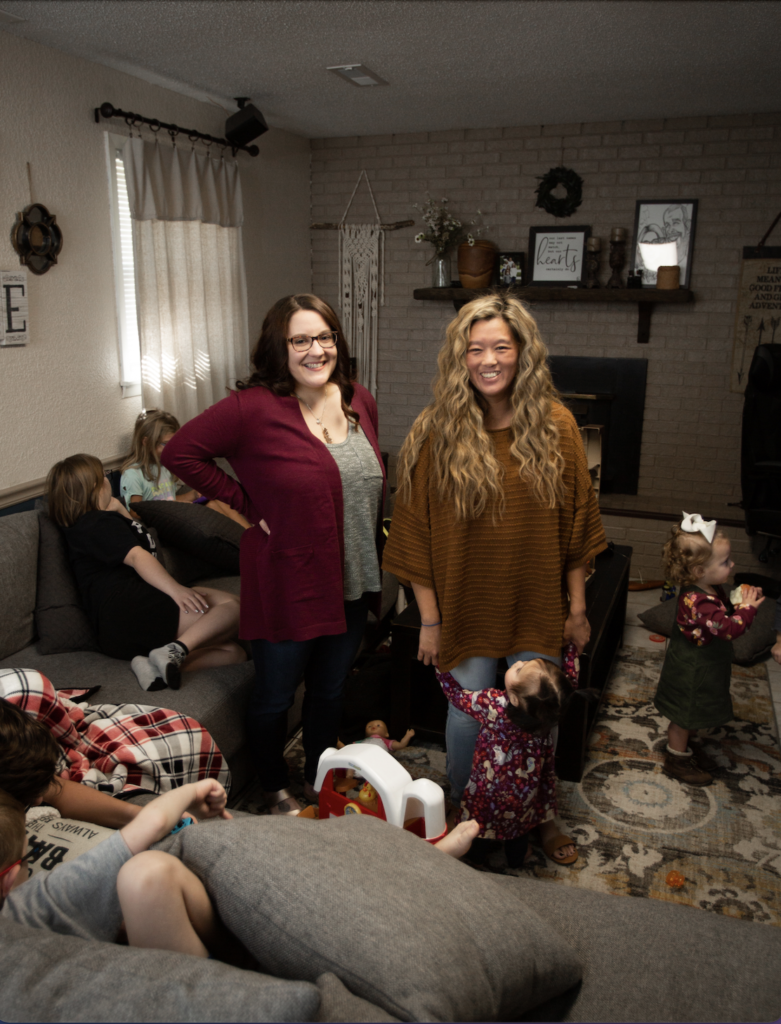 Tiffany Brown (left) and Mi Hoang are stay-at-home moms. As best friends, they own a bakery together and host the podcast “Balancing Your Bliss,” on which they talk about the challenges and joys of motherhood. Photo by Aaron Eisenhauer

Tiffany Brown of Sikeston, Mo., always wanted to be a mom — she recalls writing in her high school yearbook that she wanted to have seven kids. The dream started becoming reality when her oldest daughter was born with down syndrome during Brown’s first semester of college. Today, Brown and her husband have had seven children — Brown had three children and he had two when they married, they lost a baby, and they have one child together. Their children range in age from 16 to two.

Mi Hoang, also of Sikeston, became a mom three years ago and now has two daughters. She says her journey to motherhood was less sure; she wanted to be a mother when she was younger, but as she got older, realized that perhaps that was only because of cultural norms she’d been taught; she decided, instead, she wanted to be her own person. In her late 20s, she thought since she didn’t already have kids, perhaps she wasn’t going to be a mom. After she and her husband got married, however, he wanted to have a family, and Hoang says she found the desire to be a mom growing stronger within herself, too. After trying unsuccessfully to get pregnant for two years, though, she thought again that perhaps she wasn’t meant to be a mother. Then, she became pregnant with their oldest daughter.

Brown and Hoang are best friends; both have earned business degrees and are now stay-at-home moms. They have a podcast called “Balancing Your Bliss,” on which they discuss the challenges and joys of motherhood. They are also in business together with their home bakery, Bliss Bakery.

To make emotional space for her children, Hoang says she and her daughters lay in bed or on the couch together in the mornings and then spend time together with her husband in the evenings.

“Even though I’m with my girls every day all day long, no matter what we’re doing, I feel like a lot of times, we’re just going, going, going, so we’re just passing by, but we don’t spend actual time together,” Hoang says. “So, for me, it’s important to get the little times in there. … That’s important, to just have that quiet time with them, without TV or the phone.”

Brown, too, makes it a priority to carve out and protect family time.

“I just started saying no to events and things,” Brown says. “If it’s during the school week, we don’t do anything in the evenings unless it is sports or theater rehearsal. We don’t go places, no dinners, we’re not going out to eat on a weeknight. We try to be home. And then, if it’s a weekend and we’ve done something on Friday and we have a commitment on Sunday, we’re probably going to stay home all day Saturday, just so we can hang out together.”

“I have to fight a lot to keep this family, the eight of us, together to the point where my children aren’t saying ‘stepbrother,’ ‘stepsister,’ ‘stepmom,’ ‘stepdad.’ I have to fight for that,” Brown says. “And no matter what happens outside this home, that’s what has to happen here for them to all know they’re loved equally. And so, I think it’s very, very important to make sure that your focus is internal. Have your family dinners — it’s important. Say no to going out and doing things all the time. Take your time at home to sit down at the table.”

For Brown, being a stay-at-home mom is relatively new; although she’d been working from home since the onset of the pandemic as a mortgage lender with the bank she’d worked at for six years, the passing of her grandmother she called Nanny in July caused Brown to re-evaluate the way she was using her time.

“After [she passed away], I was like, you know what, I wasted so many days while she was here sitting in front of that computer checking emails or talking to customers on the phone, when I could have been spending it with her. And I didn’t want to do that to anybody else in my life,” Brown says.

Since Brown quit her job outside of the home to pursue being a stay-at-home mom, she says it’s been wonderful.

“It’s scary when you have six kids depending on you to walk away from something where you make a decent living and you have benefits and you have holidays off and they’re really good people. It’s just the work — I just didn’t enjoy it,” Brown says. “[Now], I get to do things I like to do. I even told my manager, it has nothing to do with the bank, but I have to give up something, because I’m not giving either thing 100%, and I’m not going to give up the thing I love. So I have to [quit the bank].”

It’s important, Brown and Hoang say, to have friends who are also mothers, to ask for help and glean ideas about how to handle situations with kids. They also say it’s important for moms to realize each child is different, so take suggestions with a grain of salt and don’t feel like a failure if something doesn’t work; as long as you’re loving your kids, you’re not failing.

What each child needs to feel loved might look different, Brown says.

There are many challenges to motherhood, but the joys make the difficult parts worth it, the friends say.

“Alone time is difficult,” Hoang says. “I don’t remember the last time I was by myself. … But that’s also the beauty of it — I’m never alone. I always have someone with me. And I talk to my kids like they’re little adults, too, so it’s like I’m having a conversation. … That’s got to be another favorite thing. Watching them learn. And seeing them grow. I like it when I can see something click in her head. You see it in her eyes.”

“It’s so hard. Everything is so hard,” Brown says of motherhood. “Your time is gone, your chores have tripled, there’s laundry everywhere. And at the same time, sometimes I think, gosh, what am I going to do when they’re gone? I’m going to be so bored. So, it’s rewarding enough that you don’t care.”

“Hopefully, they grow up knowing that they are loved and happy,” Hoang adds.