Here, Jae and Paris Newson show us how they do, so we might, too. 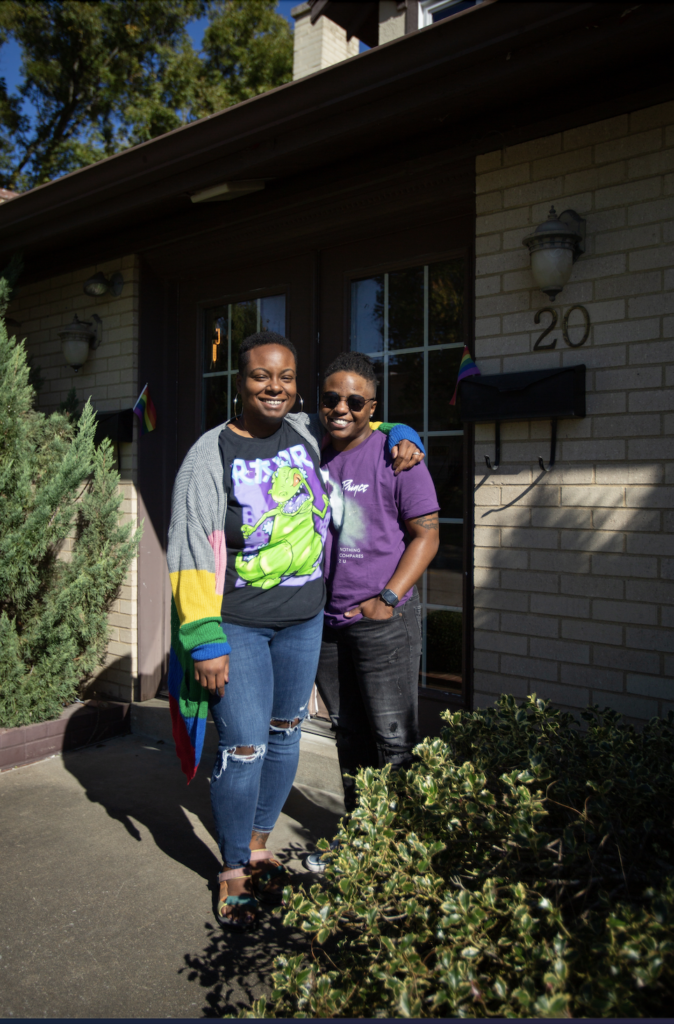 Paris (left) and Jae Newson founded 20 North Pacific in downtown Cape Girardeau in 2019. The Black-driven urban arts gallery is a space in which the couple hopes difficult conversations take place that help move the community forward. Photo by Aaron Eisenhauer

When Jae and Paris Newson noticed a lack in venues that cultivate voices different from the dominant cultures of the area, they decided to do something about it. Their dreaming, work and perseverance led to the birth of 20 North Pacific — named after the address where it’s located in downtown Cape Girardeau — a Black-driven urban arts gallery that invites people in to foster conversation, belonging and fun.

“I’m from Memphis. So, when I got here, I noticed there weren’t a lot of spaces for Black and Brown people realistically. Spaces where we can hear different types of music, or we can experience different sides of culture,” Paris says. “It appeared to be pretty one-sided here in this particular area, so we wanted to literally create a space where we could celebrate being different and bring a lot of different people together to experience different sides of Cape’s culture.”

The gallery opened in December 2019. Since, they have hosted First Friday art shows, book signings, date nights, birthday parties, baby and wedding showers, a drama camp for children, and more. The local boutique African Cultural Collective also makes its home in the back of the gallery. In the future, they plan to have an adult sleepover, field day and murder mystery theater at the gallery.

They have also hosted a series called Listen Ins, at which local leaders gathered at 20 North Pacific to have conversations about where they come from and the difficulties of living in Cape Girardeau, which they livestreamed for the community. This, the Newsons say, is one of their main hopes for the space: that people would come into it and have difficult conversations about race, LGBTQ relations and other topics that connect the community.

“We invite all types of people to be in here,” Paris says. “Let’s talk about [how you feel in response to the ideas here]. It’s OK how that makes you feel. Sometimes, people walk out [of an art exhibit here, and we ask,] ‘How do you feel now? Want to talk about it?’ So, it’s important to have somewhere to do that. … It’s just a homey, hold-you kind of place.”

In the gallery, which is housed in a home, the Newsons do the work of making space for others.

“To mother is to bring up with love and affection. So basically, pour into. That’s how I see it,” Jae says. “To nurture. To allow. To express. Whatever your definition of love, doing that with a space or these people or this community.”

“That’s exactly what we’re doing. We’re mothering,” Paris adds. “‘Cause from our experiences, we had great childhoods, don’t get me wrong, but we didn’t have safe spaces to just exist as ourselves without the rules, without the ‘You should be this way, you should be this way, you should be this way,’ and, as an adult, I feel like we have to create spaces for people like that because they need them. We met a group of SEMO kids a while back — two are gay, one hung out with them because they were being bullied — and they didn’t find anywhere on that campus where they felt safe until they came here. They felt at home. They walked in and were like, ‘You all are our new aunties.’”

In addition to creating space for others to exist in, Paris is an artist and creates space within her own life to birth artwork. In the neverending process of making art, she says she sees similarities to motherhood.

Paris says Kelly Downes, director of the Arts Council of Southeast Missouri, is a mother to her, holding her close and encouraging her to be authentic. Paris and Jae agree Mama D is also a spiritual mother to them; although they come from different cultures — Jae describes Mama D as a “tall Irish lady with red hair” — Jae says from Mama D, she learns how to be gentle, compassionate and empathetic, especially when trying to understand others.

They bring these experiences into their own expressions of mothering.

“You don’t have to have kids to [mother]. Just love. Love every chance you get, love every opportunity, every hug that you should give,” Paris says. “Give lots and lots of hugs and hold a little tight when you do, because it matters. It matters. When another woman embraces me with love, there’s just really something about it.”

This is what the Newsons hope to do through 20 North Pacific: embrace others with love.

“It’s important for us to feel like we’re included and feel like we’re welcome. And so, it’s important for us to keep doing that because since we’ve been doing that, we’ve been giving people space — and ourself a space — to feel wanted, to feel welcome, to feel important and to feel like they’re able to be themselves and express,” Jae says. “That’s what this space is for. It’s for differences, and it’s for being able to talk about it.”