Here, Jennifer Goodman, Missy Brown and Riley Brown show us how they do, so we might, too. 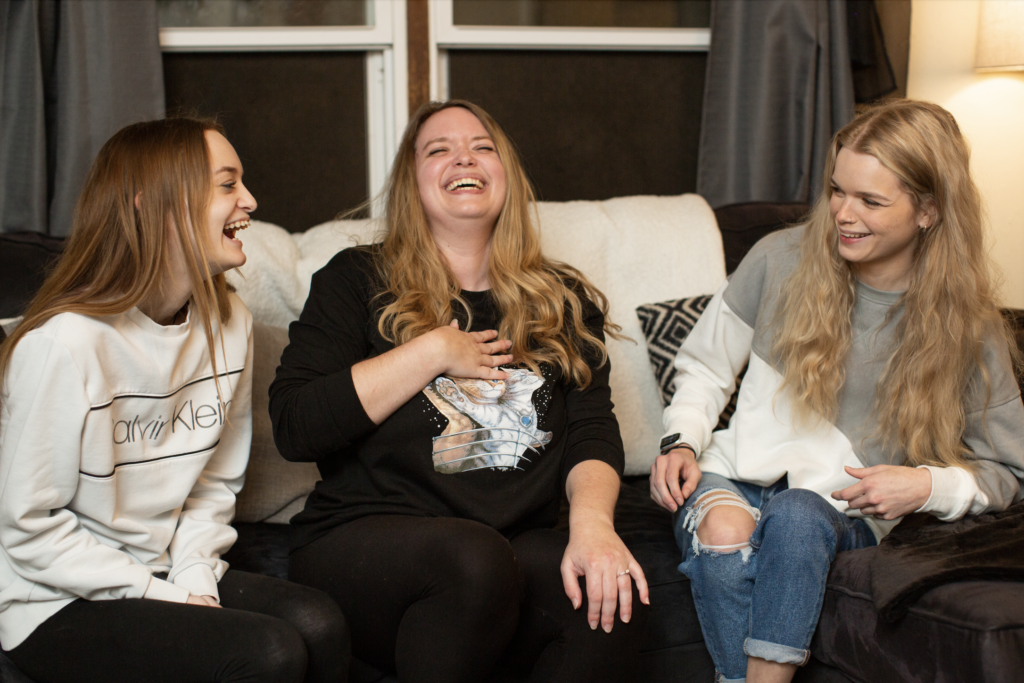 From left to right, Riley Brown, Jennifer Goodman and Missy Brown are sisters who helped raise each other as they were growing up. They say acceptance and making time for each other are key in family relationships. Photo by Aaron Eisenhauer

Growing up, Jennifer Goodman dedicated much of her time to taking care of her sisters, Missy Brown and Riley Brown, who are 12 and eight years younger than her, respectively. After their parents divorced, Goodman says she spent much of her life during high school helping keep their household together, caring for her sisters after school and in the summertime. She says during this time, her role shifted from that of a sister to a mentor. Riley corrects her.

As they’ve gotten older, Goodman says the barriers between mother and sister are starting to fade; however, the sisters do still mother each other. To make space for each other in their lives, Goodman says she opens her home to her sisters any time they want to come over — she offers them her food, extra room and listening ear. She says she also returns their text messages quicker than they return hers.

“I make space for them by just allowing them into my space, being an available person as best as I can be,” she says.

Acts of service and showing up for each other are the sisters’ love languages, they say. And they’ve demonstrated it to each other throughout their lives: Goodman took Missy to her driver’s license test and goes to Riley’s school functions. Missy was Riley’s chauffeur before Riley had her license. Riley comes to Goodman’s home to talk, pet her cats and get help on her homework. And she FaceTimes Missy every day to talk. Goodman also has a twin sister, Heather Filer, who teaches English in Farmington, Mo., and says they mother each other, as well. Filer was also instrumental in helping to raise Riley and Missy as they all grew up together.

Riley, who is currently a senior at Jackson Senior High School, says as they grow older, she wants to make sure she and her sisters continue to be part of each other’s daily lives. When important things happen in her life, she says her first reaction is always to text or call Missy and go to Goodman’s home to tell her about it.

“Always put in effort with your sisters, at all times,” Riley says. “It’s important to go do things [with them] — remember, you’re more than just sisters; you can also have a friendship.”

Missy says having an open mind is important in familial relationships.

“Have patience with people, because you might not know what they’re going through, and you might want to lash out. No. Just have some patience. That is from a mother’s standpoint, that’s my job with the babies [at the preschool I work at] and sisterhood, for sure,” Missy says. “Take time to get to know people.”

“Just let the people be who they are,” Goodman says. “I tried to force specific things onto them like, ‘This is what we’re going to do, this is how you need to act, this is the rules, this is how we have to do it,’ and I think it’s just easier to accept that Riley talks a lot and that Missy’s going to make sure that your list is in order. You just have to allow that to be the natural way things flow. Your expectations need to just not exist. They are who they are.”

As she’s gotten older and has faced struggles, Goodman says she’s realized others — including her family members — have their own struggles, too. This has helped her embrace the mothering role she has had in her sisters’ lives.

“You just have to accept that not everyone can be there for you all the time,” Goodman says. “I struggled really hard with having to give up a lot of my life at certain points to help out, and I blamed my parents for it, but they’re not bad people — there was a lot going on. … I just stopped being so angry with my family, and I’ve started to see them for who they are as real people and not just as parents or just as younger siblings [or] just people that are there to make it harder. It’s not making it harder — it’s your family, and eventually, it’s going to get better.”