The Ritual of the Body: Second and third grade students at Trinity Lutheran School, recess experts

Ritual unites soul with body. Through our attention to what is before us in ritual, we bring ourselves to the present moment, which we inhabit because we have a body to be physically present in. Our body is vessel, container, holding space, a tabernacle to reverence through which we experience the world. We are body and soul, both, in equal measures, in goodness.

So here, we extol the body and all the ways it allows us to move about the world. We pay homage to the cycle of our bodies and the incredible bearing of life they can uniquely do through hearing from a doula who supports women in labor. We talk with restaurateurs who honor the body through feeding and serving people. And we go to recess with children to learn again how to forget ourselves fully through the art of moving our bodies as we play.

May these people and their stories remind us that as we are, we are holy. And may we move through the world eating, playing, letting life in all its forms pass through us, living from this knowledge that by our very existence, we speak of the beautiful, the wonder-full, the very good. 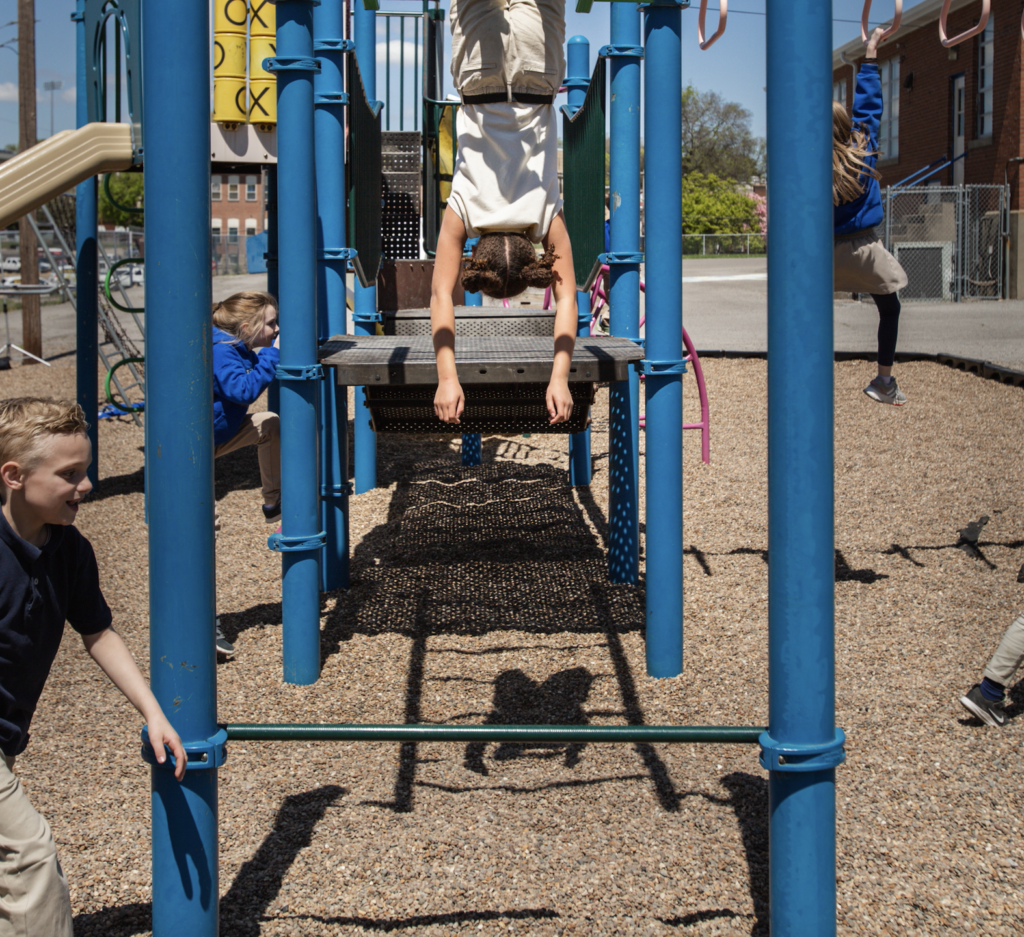 When I sit in the Burrito-Ville drive-through line at lunch — which happens a lot — I look straight ahead and see recess. It happens at Trinity Lutheran School, students running all over the playground, three or four of them at the fence waving to cars, others falling down and helping each other up, climbing on the jungle gym, playing whiffle ball, playing basketball, running, running, running. And screaming. They are so loud, and it is beautiful, this cacophony of delight. It is chaotic. It is wild. It is good and right.

When I honk one day at the small group of students standing by the chain-link fence waving and they cheer, I decide I have to learn from these kids.

What I want to learn about is wonder and awe and exhaustion, the all-out endeavor of giving all of one’s self in pursuit of an activity with no motivation other than the sake of doing the activity. But these are preconceived ideas, my own way of thinking about the world I am hoping to find affirmed through these young people. As Annie Dillard writes, “The world is wilder than that in all directions, more dangerous and bitter, more extravagant and bright.” Wonder and awe and exhaustion are my priorities, hopes, assumptions; what I learn instead as I play and talk with the second and third grade students at the school is about treating people with kindness and goodness and inclusion, despite what we may want, and risking for what is worthy. These are the things the students talk about.

“You have to make sure, even if you don’t like that person, you’ve still got to play with them,” Aria Hammonds tells me when I ask what wisdom she wants to share about recess.

“Like, if someone asked you, ‘Can I play with you?,’ don’t say no, even if you don’t want them to play with you — still say yes,” Addison Bartlett adds.

“It’s recess. Everyone gets to play with each other,” Joda Grace Bess says.

They say some of their favorite activities at recess include dancing, playing kickball with their class and swinging on the monkey bars. Even though some of the students say their least favorite part of recess is when they fall and get hurt, they don’t let that stop them from playing all-out. They tell me that when they do fall, they are taken care of: their teacher gets them a Band-Aid, or they go to the office for help.

Addison says even though getting hurt is a possibility, the risk of participating is worth it.

“Don’t just sit out to be safe; like, you can still play games and stuff, just don’t play something that’s going to put anyone in danger or hurt someone, hurt you or hurt someone’s feelings,” she says. “I think my least favorite part about recess is probably the fact that I get so tired after running around. I’m just worn out, but I don’t want to sit out because then I’m going to miss out on games and stuff, so I choose to just keep playing.”

Addison says she always feels excited for recess and looks forward to it because she doesn’t get to talk with her friends throughout the day. Joda Grace says she feels happy at recess “because she gets to run around.” Aria says after recess, she feels exhausted and wants to lay on the floor and go to sleep.

“Even if it’s been 40 minutes, it feels like it’s only been 10 because I’m just running around, and so I don’t even think to look at the time or anything,” Addison says.

This is the experience of unselfconscious timelessness we all want to get back to. That way of being in the world when something is so a part of us we don’t realize it. That feeling of being so engaged that when some external source tells us time is up, it comes as a surprise that time is even a concept at all, much less that we ourselves might be subject to it. Play. And play. And play.

While we’re on the playground, one child reminds me children can be cruel, parroting some version of bias, I imagine, they have picked up from the adult world, and I remember we each carry our burdens with us wherever we go. Children on the playground, like adults in the world outside of that safe, fenced-in space, are no different.

But, like the world outside those fences, the playground is also a place where deep goodness can be found in the hearts and actions of the people playing there, and every one of the students at some point demonstrates kindness and love to each other and to me. One of the teachers tells me she teaches her students to treat others the way they want to be treated, and it’s beautiful — when I speak with a few of the students after recess, one of them says she tries to do just that while she’s on the playground.

Just before it’s time to go inside, I am invited by some of the children to go down the slide. Actually, I get double dared. I feel a little silly, self-conscious, and need their help of encouragement to get on the jungle gym and slide down. I need to make sure they really want me to do this, that I will be cheered on and not come down the slide unnoticed. They do. Encourage me and cheer me on. And they do that for each other, too.

What many of the students tell me they love most about recess is playing and talking with their friends. Maybe, in that, is the wisdom, after all. This abandonment of ourselves to each other, with each other, for each other. Let us find ways to again be childlike.

Previous spark
Next The Ritual of the Body: Gracie Aguirre, Laly Martinez and Gabby Rodriguez, restaurateurs