The Ritual of the Body: Gracie Aguirre, Laly Martinez and Gabby Rodriguez, restaurateurs

Ritual unites soul with body. Through our attention to what is before us in ritual, we bring ourselves to the present moment, which we inhabit because we have a body to be physically present in. Our body is vessel, container, holding space, a tabernacle to reverence through which we experience the world. We are body and soul, both, in equal measures, in goodness.

So here, we extol the body and all the ways it allows us to move about the world. We pay homage to the cycle of our bodies and the incredible bearing of life they can uniquely do through hearing from a doula who supports women in labor. We talk with restaurateurs who honor the body through feeding and serving people. And we go to recess with children to learn again how to forget ourselves fully through the art of moving our bodies as we play.

May these people and their stories remind us that as we are, we are holy. And may we move through the world eating, playing, letting life in all its forms pass through us, living from this knowledge that by our very existence, we speak of the beautiful, the wonder-full, the very good. 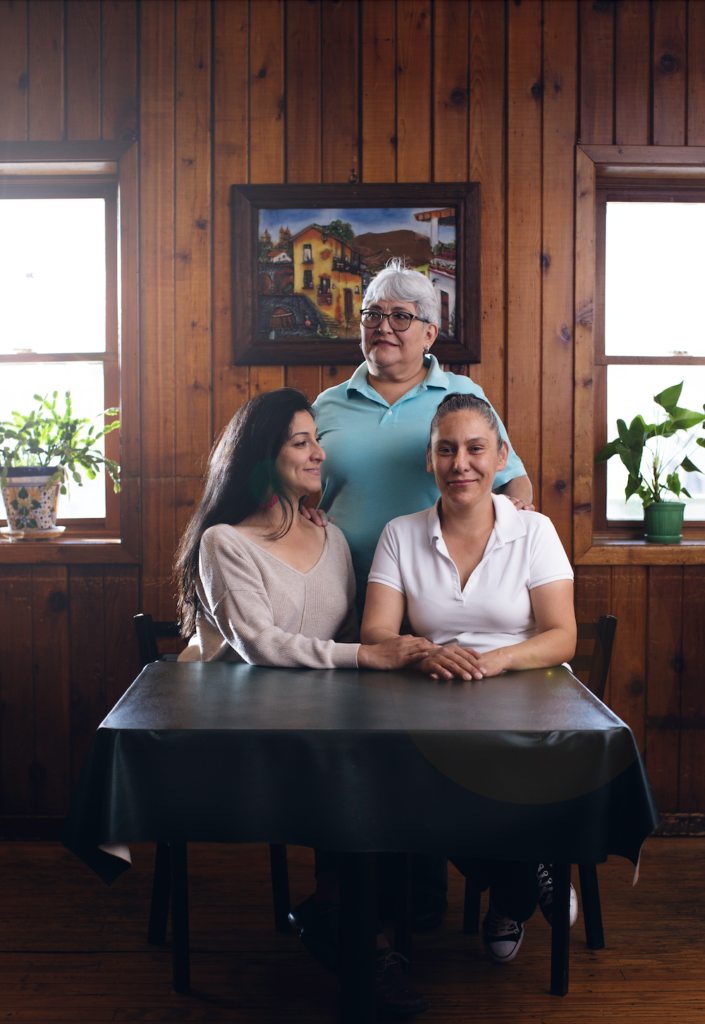 It started with three sisters searching for authentic Mexican food in Cape Girardeau, the kind they were used to cooking at home. They wanted to serve people — and eat for theirselves — homey, “normal” food that would comfort them. Lola was a certified public accountant and knew numbers. Julia knew how to cook. Gracie was good at public relations. So, they began making tamales.

They sold the tamales from their home and then bought a concession trailer and started selling their tamales at fairs and flea markets. In 2007, Gracie opened a brick and mortar Muy Bueno restaurant location in the plaza off of Independence Street in Cape Girardeau. Four years later, as she was driving to buy corn tortillas, she noticed the building that formerly housed Show Me’s was for rent. She rented it, and, with the help of her family members, cleaned it up and moved her restaurant there.

Now, Gracie runs the restaurant with her two oldest daughters, Gabby Rodriguez and Laly Martinez; her youngest daughter, Lillie Aguirre, works there as a server.

Gracie grew up in Durango, Mexico, and moved to Orange County, Cali., when she was 18. She worked there for two days in the fields — “It was not for me at all,” she says — and then for a couple of months in a tortilla factory before moving to Chicago to be with her sister. There, she worked with several companies for years before moving back to Orange County to work as a financial coordinator at a children’s hospital. From there, she moved to Anna, Ill., and then to Cape Girardeau. In 2008, Laly moved to Cape from California, as well, and Gabby was right behind her, moving to Cape in 2010.

“My mother moved to the Midwest, and my mother is a magnet,” Laly says. “My mom was the catalyst for all of us moving here. You just kind of want to be around Mom; you have her, and she’s the one that’s really behind the restaurant at all. She’s the one that really started everything, and so we just kind of came to help her.”

At Muy Bueno, Gracie is in charge of the kitchen, cooking, ordering and buying groceries and making sure the restaurant is running smoothly. Laly handles paperwork and social media. Gabby heads up the front of the restaurant, serving customers as well as leading the serving staff.

Although all three women say it was an adjustment learning to work with their family members and that they annoy each other at times, they have learned how to communicate with one another and have realized how much they love being around each other, living in the same town and working at the same place. They work to ensure each of their customers who patronize the restaurant feel nourished with that love expressed through food and service, too.

Serving at Muy Bueno for the past 11 years is the first time Gabby has worked as a server. As the manager, her joy is apparent through her actions and words: She loves what she does.

“For me, I’m happy. This is like the best job I’ve had, being a server. I don’t see it as a lower job. I just see it like another job. Because you’re serving people. And sometimes, people can be rude, and sometimes, people can be cool — it just depends on the server, how you’re going to end that relationship with your customer,” Gabby says. “A server is giving an experience, because you learn everything new every day. Nothing is the same every day. It’s a different pattern, and it’s different people who come.”

She says when she can see one of her customers is having a hard day, even though she doesn’t necessarily know their problem, she prays for them and says something to them to try to help them feel better. She sees each interaction with a customer as a challenge to rise to — especially when they tell her they came because they heard Muy Bueno is the best. She wants each person who eats at the restaurant to feel like they have a place there.

“We know a lot of our customers by name, we know their stories, and it’s something nice to be able to feed them, too, and have them come back for that nourishment,” Laly says. “Sharing a meal is so important. We love this spot because people come here with their children, and people come here with family members and grandparents — this is like their spot to stay. Just having that ability to unite around food is so important. People forget the conversation that is part of sharing a meal. … Here, it’s that one spot that you’re going to be nourished with good food and good ambience that makes you happy — you can leave comforted after you go.”