We show up at Anna Zembsh’s home studio in Cape Girardeau, and she shows us around, introduces us to her cats Bubbles and Lil’ Craig; points out the sternum from an armadillo she found, brought home and boiled (apparently, it made the house smell awful, but it makes a cool shelf decoration now); and explains about the spikey bark from a honey locust tree she found at Duck Creek in Stoddard County and now has hanging on her wall. She tells us the story of how she met her fiancé (he was living in his truck working on a farm in Arkansas when she went out to camp for Labor Day weekend with her brother who was living in his van and working at the same farm) and talks about her love for snakes and bikes. And throughout it all, she gives us a tutorial on her process for making stained glass.

It’s an art traditionally rooted in ritual and sacred worship, used in monasteries as early as the 7th Century that became especially popular in church usage during the Middle Ages. Anna works within this traditional structure of the stained glass process to create pieces of things she finds beauty in such as June bugs, while innovating by utilizing unique materials such as snake skin, dried ferns and bike chain rings in her designs.

“I needed a creative outlet at home — [making stained glass] kind of like freakin’ saved me, especially this past year, being at home all the time,” Anna says. “It gives me something to do, and it’s one of my jobs. … I love doing this. I have so much fun with it. … Stained glass is kind of endless with what you can do.” 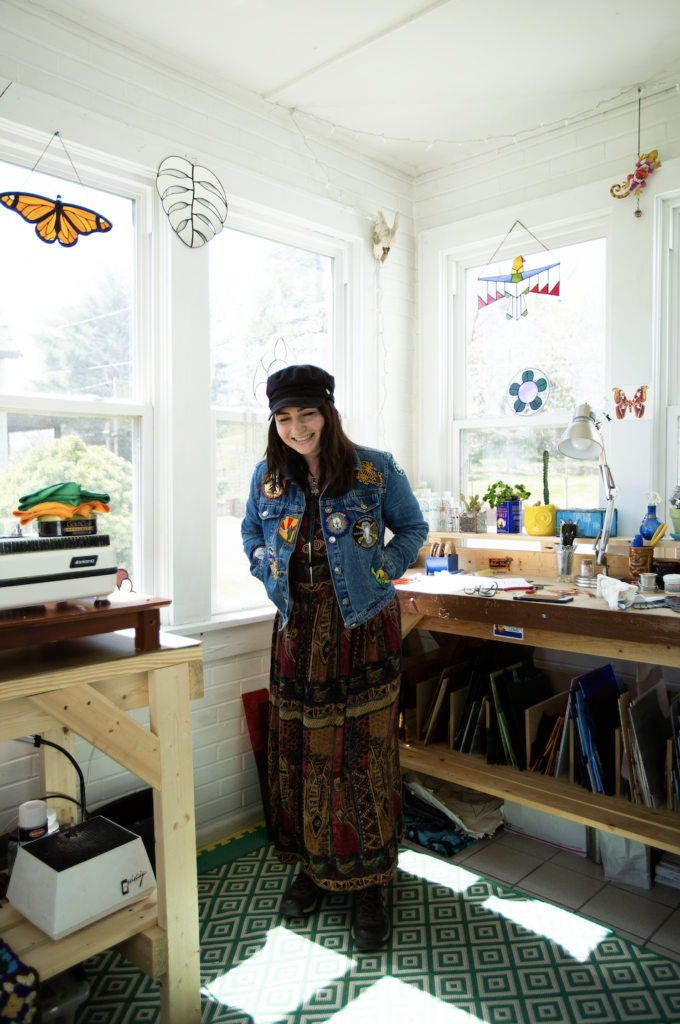 Anna grew up in Phoenix, Ariz., and moved to Cape Girardeau, where her mom is originally from, when she was 10 years old. She says the colors of the desert from her childhood and the colors of Sedona, Ariz., where she got engaged this past year, inspire her, and she often uses the varying shades of browns and yellows and reds of the Southwest in her stained glass work.

Anna was initially inspired by stained glass as a child — she says her mom had a lot of stained glass decorating their home while Anna was growing up, and she always wondered how it was made. In 2017, she started watching YouTube videos about the process and following stained glass artists on Instagram. In 2018, she tracked down a local stained glass artist in Cape Girardeau and took a couple of classes to learn the basics. From there, she kept learning on her own, through trial and error.

“If I can do it, I feel like anyone can. Don’t give up, because you are going to suck at first,” Anna says. “The first few things I made were terrible. I was really proud of them still — I was like, cool — but yeah, they weren’t good.” 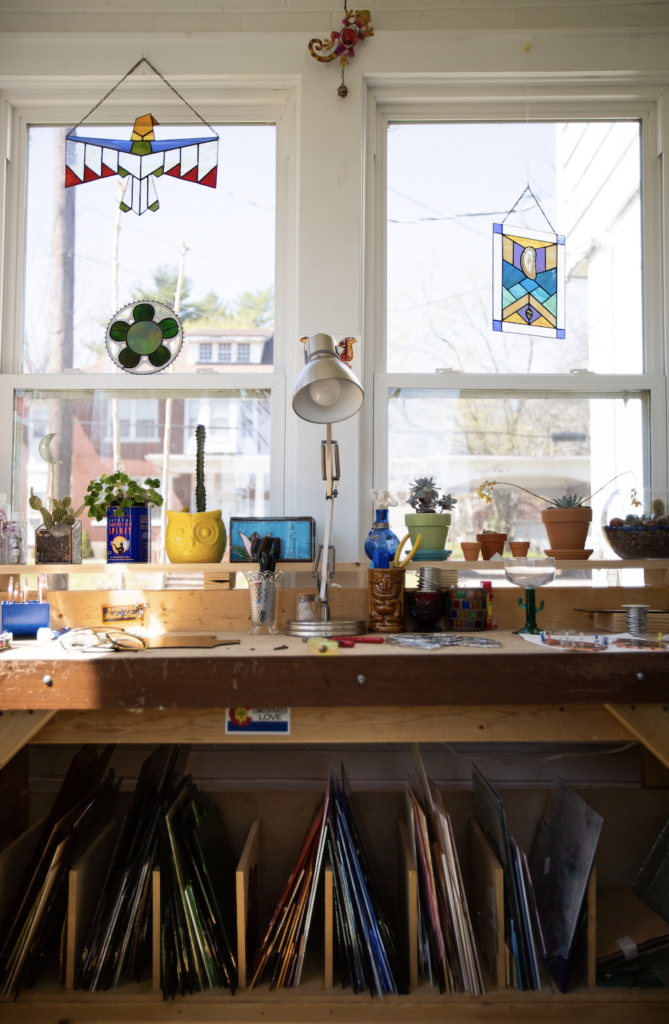 Still, she kept persevering and following her interest. In the small place where she lived, she replaced her dining room table with a workbench so she could continue learning and practicing the art, before she moved into her current home with her sunroom studio. Mindful of the fact that she “still has so much to learn” with stained glass, someday, she hopes to have her own workshop so she can invite others in and teach classes while she continues to practice the art herself.

For Anna, the process of making a stained glass piece is a ritual that helps her focus. First, she designs the pattern with the help of her fiancé Parker Bond, who draws the pattern on paper as she describes her vision to him. Then, she chooses the colors and cuts by holding them up to the light to see which ones she likes for a particular piece. Some of the glass she currently uses is vintage, from the 1980s and 1990s; she bought it from a stained glass artist friend in Anna, Ill. 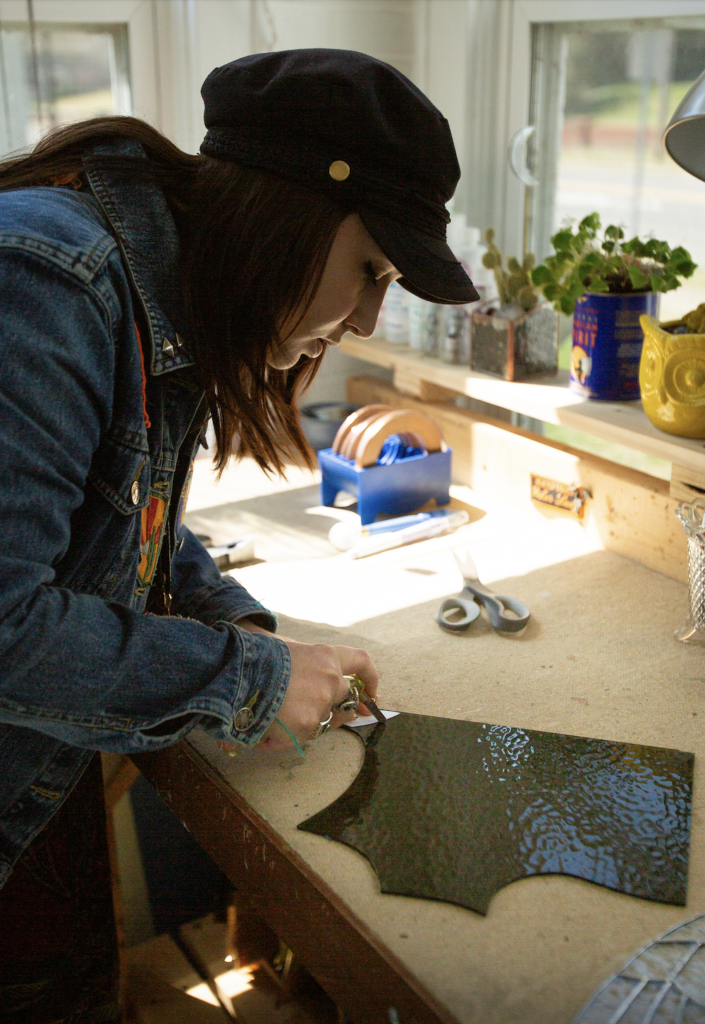 Next, Anna retraces the pattern on paper and cuts each piece apart so she can fix each piece to the glass before cutting the glass with her cutting tool. She recently purchased a ring saw to allow her to make dramatically-curved cuts, which expands her options when creating a piece. She grinds each piece of glass with her glass grinder to smooth the edges. She says she often gets small cuts on her hands from the glass while she’s working, although they hurt less than burns she gets from cooking.

Next, she wraps each piece of glass with copper foil; she says each piece of glass takes approximately 15 minutes to cut, grind and copper foil. Next, she pins the pieces together — which she says have to fit together perfectly, like a puzzle — before applying flux to clean the outer layer of copper foil so the solder flows better and sticks to it, bonding with the other metals. After soldering, she cleans and dries the piece and then paints patina onto the solder, a chemical reaction that turns the solder black or copper, depending on the type of patina, a step she describes as “magical.” After the patina, she waxes the piece using car wax. After this dries, she polishes the piece. Finally, she adds hooks and a chain with which to hang the piece. 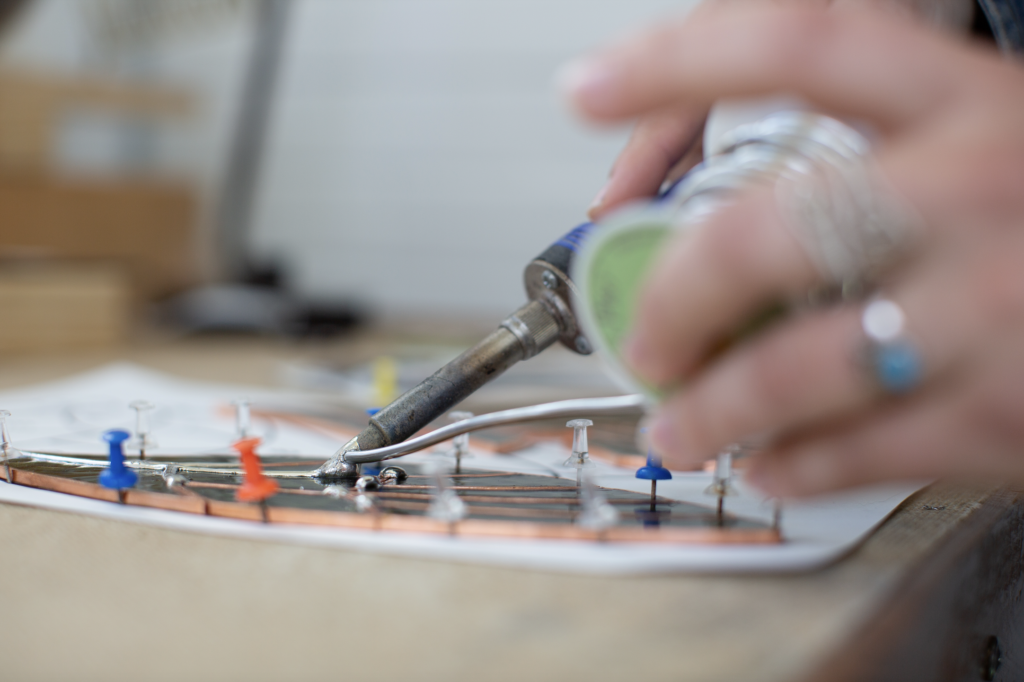 A medium-sized piece takes her a couple of days to create from start to finish, she says, which is about half the time it took her when she first started working in the medium. She sells her work on Instagram and Facebook, making work that is commissioned and work she wants to make herself.

“Every time I make something, it’s the same process. I take the same steps, and it’s really calming in a lot of ways, too,” Anna says. “When I solder something all together and I can hold it up in the light, it is so exciting because I have no idea what it’s going to look like half the time ‘cause it’s really hard to actually visualize all the glass together before actually putting it together. So it’s kind of a unique surprise every time I get finished with something.” 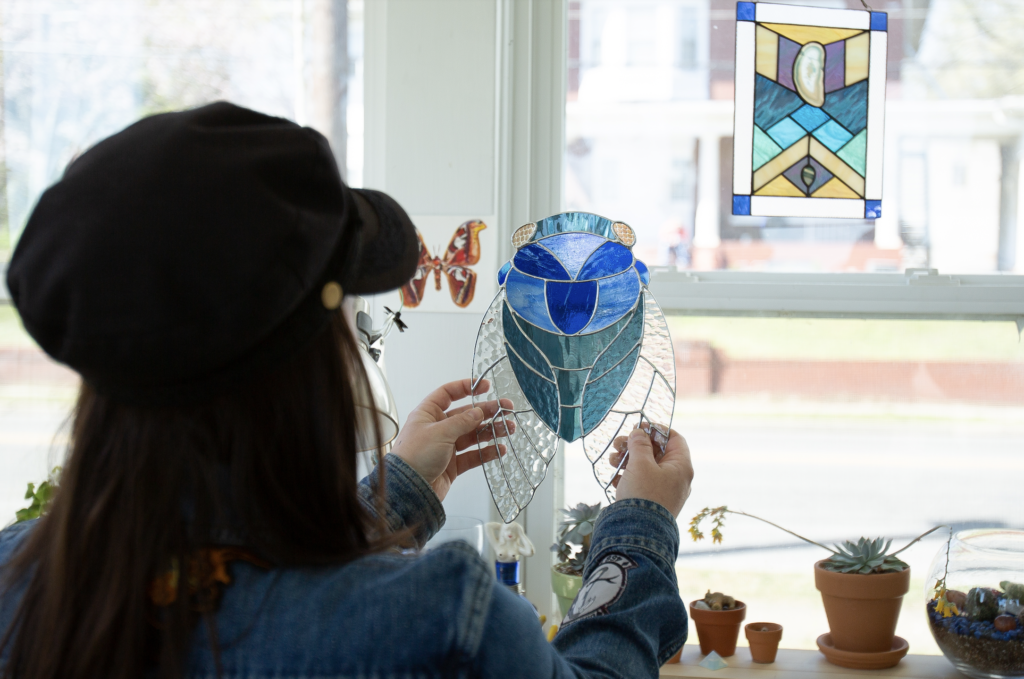 Within her pieces, she is inspired by nature, incorporating elements of the things she loves: she sometimes puts snakeskin she collects from the wild between pieces of glass within her creations. She also created a piece with a pressed fern she picked up in the woods at her job at Trail of Tears State Park and has also made a piece with a chain ring from a bike, an homage to her love for riding. Going forward, she hopes to make more hanging planters to plant in.

Whatever comes next in her stained glass journey, she says rather than get caught up in what others want her to do, her main goal is to continue to make the things she wants to make. It’s a plan that fits with her overall vibe and has served her well so far. 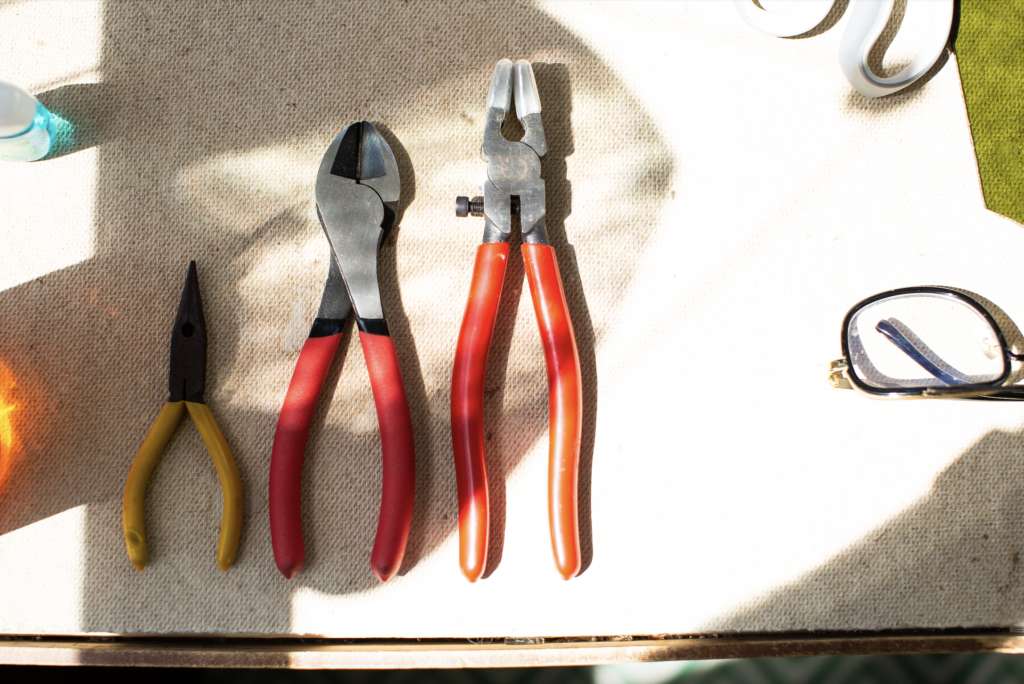 “I’m not a poser,” Anna says when we ask her to stand in her sunroom for a portrait, referring to the fact that she’s usually the one taking photos rather than being in front of the camera.

And she’s right, but maybe not in the way she means. After spending only an hour and a half with her, hearing about her love for catching snakes, the life stories of how she named her rescue cats, observing the patches on her denim jacket, becoming easy friends, it’s clear what she says as she smiles into the camera doing finger guns is true. Anna Mae Zembsch is a woman who pursues what she likes in life, and her art is a testament to that.

Definitely not a poser.

Previous Art for You: “Escape”
Next ritual: letter from the editor