meet along the way: Suzanne Thompson

Women do incredible things. Here, we feature the stories of women who are a part of the Southeast Missouri community by way of living here, being from here or passing through. We hope these stories inspire you to connect with others and that they encourage you to be who you are in the world. We need you and your unique gifts.

This story was first published in the February 2019 issue of “The Best Years (TBY).” 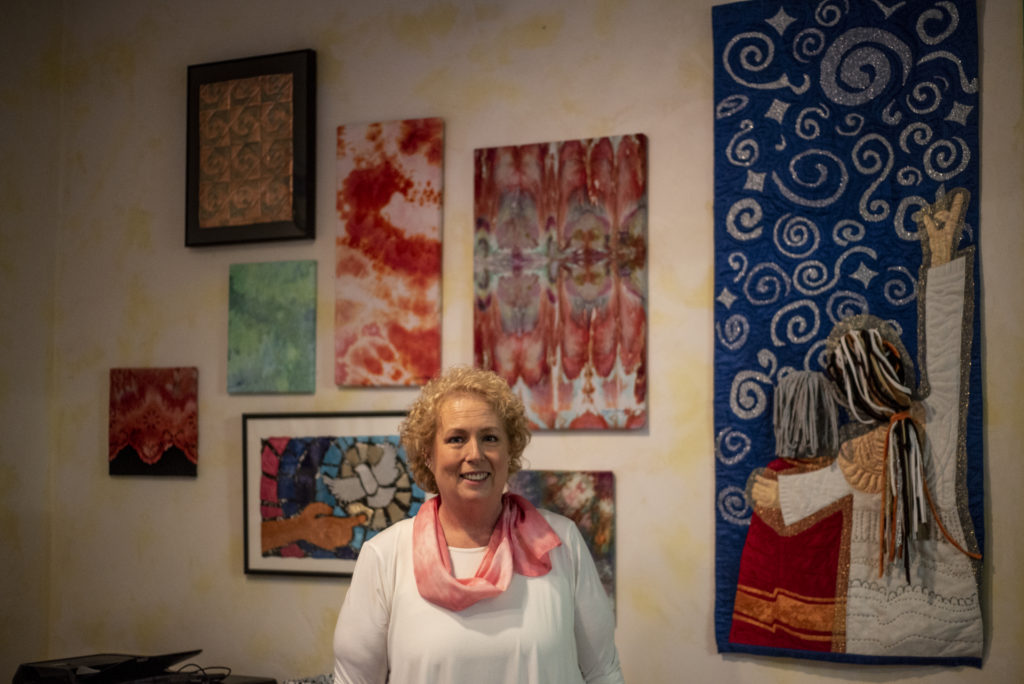 Suzanne Thompson stands amongst her artwork at her home in Ste. Genevieve, Missouri. Photo by Kassi Jackson.

It’s true: in many ways, she has been in close proximity to important historical events as they happen.

Cases in point: her mother’s cousin was Roone Arledge, who was the past president of ABC News, hired Barbara Walters and invented the instant replay; Thompson’s father installed the first “red phone” system of direct communication between Washington and Moscow in the White House when Kennedy and Khrushchev were in office; and during graduate school, one of Thompson’s peers was killed by Ted Bundy.

Her story of how she came to Ste. Genevieve is also an interesting one. Thompson grew up in the Washington, D.C., area, meeting politicians. Her family was comprised of artists; her mother was an artist who chose to forego her full-ride scholarship to Vanderbilt law school for California and a job at a telephone company.

Thompson herself attended Berea College in Berea, Kentucky, where she studied art. She then attended Florida State University for graduate school to become an art professor. There, her major emphasis was in sculpture where she worked with fiber art. While there, she worked under Don Bonham, whom she says was involved in the New York art scene and whose work was featured in Playboy Magazine.

“I went from knowing, learning how to do things, to learning how things actually get done,” Thompson says of her time in graduate school.

During this time, she also attended a series of workshops where she learned from the renowned textile artist Sister Mary Remy Revor, SSND. Thompson says in these workshops, she learned more than she had during her entire undergraduate education.

“She said, ‘Suzanne, ideas do not come from nowhere,’” Thompson recalls of Sister Revor. “I honestly had thought they did. I thought if you didn’t have dreams about something or just come up with it all by yourself [it didn’t count]. I never realized how much artwork is always referencing something else. Anyway, it was a big change.”

After graduate school, Thompson could not find work as an art professor. She says she worked a “long line of just regular jobs” and was “too lazy” to kickstart her artwork. Her husband was a professional golfer and friends with Arnold Palmer; although she says they were not wealthy, they “ran in pretty fancy circles.”

When Thompson turned 50, she realized it was time to make a change.

“Around 50, I thought, ‘Oops, time to fix some stuff, or it’s going to be too late,’” Thompson says. “So I did a number of things. One of which was, I decided to start a four-year theological path through Sewanee University in Tennessee. … I thought it was a good time at 50 because I am an Episcopalian — although in college I was a Daoist and you know, a number of other things — which means when I finally settled, I went back to [the religion of] my childhood and am perfectly happy.”

Thompson says she thought it was “time to maybe read the Bible” and “figure this out.” During the first year of her theology classes, she learned about the similarities between Judaism, Islam and Christianity, how the religions split from each other and that all three religions worship the same God.

This changed her worldview, inspiring Thompson to get serious about art again and to begin creating, incorporating the new ideas she was learning into fiber art pieces. The first piece of art she did in this series includes the words “Count the stars, if you can,” words spoken in the Old Testament by God to Abram, words she says deeply moved her.

When Thompson got divorced after 32 years of marriage, she says she wanted to start over and “picked Ste. Genevieve basically from the internet.” Although she wanted to be no more than two hours from the ocean and had other areas of the country in mind, she says she began looking to move to a Mississippi River town because she believes God directed her to it. After doing research and visiting multiple times while trying to decide between moving to Ste. Genevieve and Hannibal, Missouri, Thompson says the song “A Tear Stained Eye” by Son Volt randomly played on repeat on her Pandora station. In it, there’s a line that sings, “Ste. Genevieve will hold back the waters.” This, along with the tight-knit community she wanted to be a part of in the small Southeast Missouri town, prompted Thompson to make the decision and the move: Ste. Genevieve it was.

That was in 2012. Since, Thompson has continued creating her fiber art work, specifically creating icons of Biblical characters that are relatable — such as her piece of the Holy Family at the beach — so she can share her faith “without screaming,” helping to make people feel comfortable. She also began practicing the methods of shibori, a Japanese dyeing technique thousands of years old, as well as snow and ice dyeing, a much newer technique. She teaches classes on these methods at her home.

Thompson is also a tour guide for the living history walking tours in Ste. Genevieve.

“I’ve got a teacher’s heart. This is what I want to do,” she says of the classes she teaches and the tours she gives. Thompson even renovated her kitchen to accommodate four to five people for each class she teaches.

Part of being a good teacher is also being a good student; from the process of art, Thompson says she learns everything is cyclical.

“If you learn something, the next time it comes around, you learn more about it and you have a framework to look at it in,” she says. “It’s kind of fun to know where that’s coming from. It also helps with wisdom. You learn that what goes around comes around. But it’s good to know the basis of where it started because it helps to illuminate where you are now and where it’s going.”

For this Forrest Gump, dyed vintage tablecloths, curtains and table runners are her box of chocolates.

“Really, they’re little miracles,” Thompson says of the finished dyed pieces. “I love the surprise. I love the serendipity of it. You don’t know what you’re going to get.”