This story first appeared in the April 2020 issue of “The Best Years (TBY).” 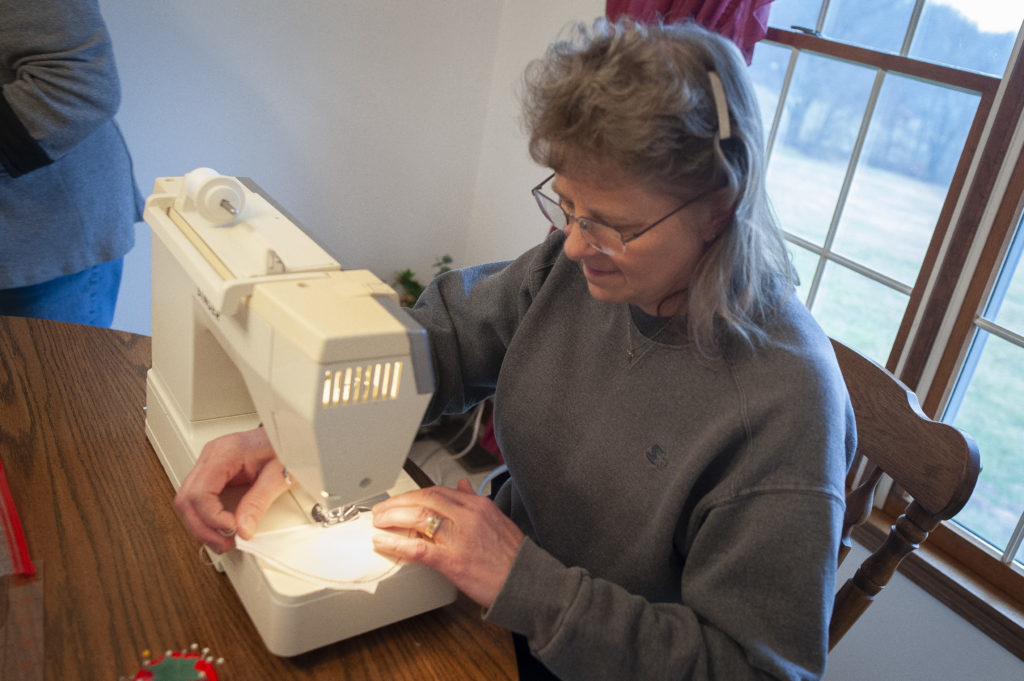 Connie Angle of Burfordville shows part of the process of making infant burial clothes to the Southeast Missourian on Thursday, Jan. 23, 2020, at Angle’s home in Burfordville. Photo by Jacob Wiegand.

A bridesmaid gown or wedding dress is something you wear once. And then the wearer wonders what to do with it.

Connie Angle, RN, and her mother, Klodean Crader, are providing a way to reuse formal dresses while bringing comfort to other women: they sew infant burial gowns and rompers from the formals. These outfits are then given to families grieving the loss of their baby from miscarriage, stillbirth or newborn death, families who often haven’t had time or energy to think about this aspect as they grieve their loss.

Angle, who has worked as a registered nurse in the newborn intensive care unit at SoutheastHEALTH since she graduated from a Southeast Missouri State University two-year nursing program in 1985, says the endeavor can be attributed to divine intervention.

The story goes like this: one Sunday approximately five years ago at her church, prayer was requested for a family who had lost their baby. That same afternoon, recognizing a need at the hospital, Connie asked her mother if she would be interested in making burial gowns from old wedding and bridesmaid dresses for babies who had passed away. Crader agreed, and Angle found patterns on the Internet that evening. The next morning at 6:45 a.m. at the time clock at work, she told the head of the Share program that she was considering making the dresses and rompers. Mid-morning, even though he hadn’t heard that Angle was considering doing the project, another nurse brought in a wedding dress to donate and said he had heard that burial gowns could be made from wedding dresses. Connie took that as her sign.

“This is just kind of a God-sent program,” Connie says.

So she began collecting wedding and bridesmaid dresses, and she and Crader got to work sewing. They make a variety of sizes for babies who weigh one pound and up in dresses for girls and rompers for boys; each dress or romper takes a few hours to make. They also make a fleece blanket to go along with every dress or romper, as well as include a handkerchief made from the same dress as the baby’s dress for parents to keep. Additionally, they put satin on teddy bears’ feet so that a baby’s footprint can be stamped on it in ink.

There has been an outpouring of support for this project from the community; currently, the mother-daughter team has 40 dresses that have been donated and are not accepting more donations for the time being. Angle tries to let each bride who has donated her dress see a finished burial gown created from her dress.

The project allows Angle and Crader to use their gifts in the service of others: Crader has been sewing since she was around five years old. Growing up on a farm without electricity, sewing was one of the things she liked to do. She learned to sew on a treadle machine, and after she graduated from high school, her sister who was four years older than her and didn’t like to sew bought the material and had Crader use her passion for sewing to make them dresses. Crader then went to work sewing at Deever’s Shoe Factory in Lutesville until it closed, then to Inland Shoe in Advance for 20 years until it closed and then to Tri-Con making seat covers in Cape Girardeau, where she was laid off. She then worked at Paramont Hat Factory in Marble Hill until they closed and then finally at Henschel Hat Factory in Sedgewickville. She still sews on a 1950s model Singer sewing machine.

Angle learned how to sew as a little girl from Crader, who had her sew straight lines on notebook paper and then later scrap fabric onto JCPenney’s or Sears’ catalogue pages. Angle still has the pieces of fabric sewn onto catalogue pages that function as quilt blocks; she has yet to sew them together. In the eighth grade through high school, Angle took home economics, tailoring and sewing classes to further her skills. She still sews on the machine her husband bought for her when she was pregnant with their first son.

Angle and Crader say they have always been close, and that they enjoy doing this project with each other to help families.

“We get to work together,” Crader says of one of the reasons she makes the infant burial gowns and rompers.

“It’s the most emotionally-draining day you’ll ever have as a nurse, but it’s also the most rewarding,” Angle says of the days they give out the dresses and rompers. “And whether you have seconds, minutes, hours — you cherish every moment. Some babies are born stillbirth, but you try to focus [on] help[ing] the mom really look at the baby because memories and pictures is all she’s going to have. And so we try to cherish every moment that we get. Some moms get minutes, seconds, hours; whatever they get, we make the most of it.”

Sierra Kaiser of Scott City, Missouri, received one of these dresses for her daughter, Daivlyn, who was born with Trisomy 18, a condition caused by meiotic disjunction that results in a baby having three chromosome 18s rather than two, causing complications that are often life-threatening in the early months and years of a baby’s life. Because of this, specialized doctors in St. Louis had suggested to Kaiser that she terminate her pregnancy; Kaiser refused, saying that if there was any chance her baby could live for any amount of time, she wanted to give her that. Daivlyn, who was born in March 2019, lived for nearly three days, during which time Kaiser says she saw it as her “job to love her.”

Kaiser has three photo albums full of photos to show this is just what she did. During this time, the Share program provided Kaiser and her family with a slideshow of pictures of Daivlyn, a teddy bear with her heartbeat recorded in it and castings of her hands and feet. And of course, she received a burial gown made from a donated wedding dress.

“It means a lot, and it was beautiful,” Kaiser says of the dress and the Share program. “To have [the nurses] still contact me — call me, text me, [ask] how are you doing — checking up on me and stuff, it means a lot.”

She decided to keep the dress since her daughter wore it, so that she would have something to remember Daivlyn by. She displays it in a shadow box. “It hurts, but … at least I have something,” she says.

Although Angle refers to the dresses and rompers as “such a small gesture” when put in perspective with what the parents are dealing with, this is the sort of support and comfort she hopes to provide to families dealing with this type of loss.

“As every bride’s unique, every baby’s unique,” Angle says. “I say all the gowns were worn in love, and every baby’s been wrapped in love.”