Women do incredible things. Here, we feature the stories of women who are a part of the Southeast Missouri community by way of living here, being from here or passing through. We hope these stories inspire you to connect with others and that they encourage you to be who you are in the world. We need you and your unique gifts.

This story also appeared in the July 2020 issue of “The Best Years (TBY).” 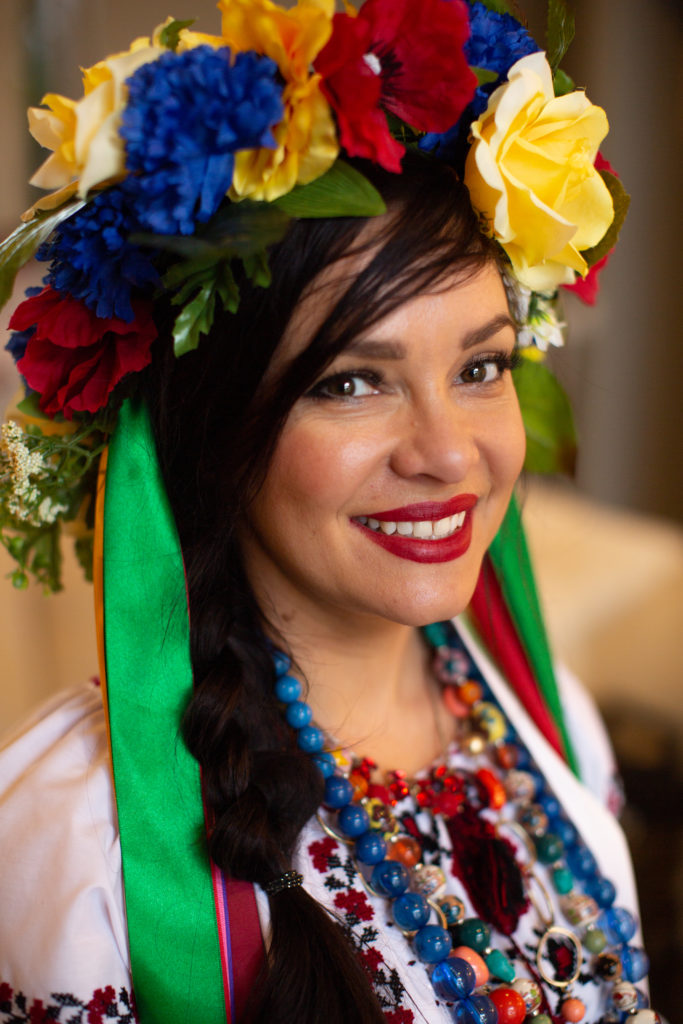 In fact, it’s not something that was ever in her plan. Instead, she wanted to build her life in Bruges, Belgium, where she had moved and worked as an au pair for a little more than a year after she graduated from nursing school and MAUP (Interregional Academy of Personal Management) in Ukraine. In Belgium, she had friends, a job and a boyfriend. She was planning to continue her education in Ghent, Belgium, too.

God, she says, had other plans, however.

It was 2007, and Anna came to America to visit her mother, Tatyana Lipskaya, who had moved to Perryville, Missouri, from Kiev, Ukraine, after marrying her husband who was from St. Louis and had moved to Perryville to work for TG Missouri. Anna had every intention of renewing her student visa in Belgium and returning there after her visit to America to enroll in the university program she’d been accepted to. At this time, however, Belgium was undergoing the 2007-11 Belgian Political Crisis, and their government stopped issuing visas; they did not renew her visa.

“I was heartbroken,” Anna recalls. “I had all these plans. I was going to school, and I already knew how to communicate in Dutch, and I loved that language.”

Her mother did not want her to live in Ukraine by herself, and since Anna’s plans in Belgium had fallen through, she decided to renew her tourist visa in the U.S., move to Southeast Missouri with her mother and “look for the opportunity to stay here.” It was August 2008.

She says in the beginning of her time in America, she “met a lot of prejudice” and did not enjoy living in a small town. It was a culture shock to her to not be able to use public transportation, walk from place to place or have quick, inexpensive access to traveling to other countries, like she was used to in Europe. She did not have a car or license yet, so she had limited access in going places, even in day-to-day activities. It was also difficult for her to live in such a small town when she was used to living in towns and cities that were larger than Perryville and had more opportunities for activities such as snowboarding, skiing, ballet, opera and theater. Additionally, she had to work hard to practice speaking English, the food was different and she didn’t know many people. Although she wanted to get a job because she was used to being employed and having her own money, her visa didn’t permit her to work in the United States. It was a difficult transition.

“I was missing my friends, family,” Anna recalls. “So I was homesick, foodsick. And it took a while — it was rough for a couple years, maybe, until I started developing more relationships and learned how to drive a car.”

Although she’d already earned her bachelor’s degree in nursing in Ukraine, she decided to enroll at Southeast Missouri State University to study nursing and become a family nurse practitioner so she could get a job in health care within the United States. In Ukraine, she says, nursing is much different; there are no distinctions of different levels of nurses, and nurses do not have as much power or responsibility as here in the U.S. Rather, Anna says they must follow whatever the doctor says immediately. Doctors and nurses are not paid well, and there is no insurance in Ukraine, so people often diagnose and treat themselves, taking medicine for things like high blood pressure sporadically because many people are not educated about health and medicine.

“Medicine [in Ukraine] is not as advanced; I could not imagine myself to be as advanced as I am right now [if I still lived in Ukraine],” Anna says of her career. “It’s very rewarding, and it’s very satisfying.”

Anna says earning her nursing degree at SEMO was “stressful” because she was a non-traditional student and not a native English speaker. While attending school, she moved to Cape to live with Mary Yaremko who is Ukrainian and immigrated to America in 1951. Anna says she often felt nervous about failing exams because she couldn’t afford to fail, and was especially nervous about it when she would see American students who spoke English natively fail. She worked hard and studied almost all of the time in order for her dedication to pay off.

It was while in nursing school that she met the man who would become her husband, Ben Schlender. They started dating as they were finishing up nursing school and then got married in 2013. Anna moved to Cape Girardeau and got a job at Saint Francis Healthcare System. She also decided to go back to school to get her Master of Nursing Science, family nurse practitioner degree. She now works as a hospitalist (internal medicine) nurse practitioner. Although she didn’t foresee it, this is how she ended up building her life in Cape Girardeau.

In America, Anna says she works day by day at bettering herself, in both the simple, everyday ways and in her larger life goals. One example, she says, is with cooking — each time she makes a dish, she tries to perfect it a little more. Trying new recipes was not necessarily something she would have done if she had stayed in Ukraine, she says, because she did not have the disposable income to risk on buying ingredients for recipes she wasn’t familiar with, in case it didn’t turn out. She says looking ahead while also focusing on the things each day brings is key.

“The big plan maybe I’m not yet there, but [I’m working on] trying to keep moving and going towards better every time, trying to better yourself. Better with whatever you do,” Anna says of what she’s learned from immigrating to America. “Like in my case, I [didn’t] know if I [was] going to stay here what I [was] going to do because I hadn’t realized that you can have the path, the career, and it’s important to stay on track, look kind of forward and beyond what you see today. You don’t know what’s going to be in five years, but you just have to focus … stay positive. … You know, have patience.”

What is surprising to Anna about America? Besides the degree of advancement in medicine, also the dietary habits, she says; people eat out much more here even though it’s expensive, whereas in Ukraine, people cook at home most of the time because it is an important part of Ukrainian culture. Anna says she, her mother and Mary cook Ukrainian food such as borsch and stuffed peppers at least once a week and oftentimes more. Additionally, people don’t drink tap water in Ukraine; instead, they opt for sparkling water. They don’t use ice in their drinks. And they don’t have free refills for drinks or condiments at restaurants.

In America, Anna discovered the joy of cheeseburgers. “It’s just addicting,” she says.

Additionally, she says that in Ukraine, people don’t smile at each other while walking on the sidewalk, although people are generous, open and welcoming in heart. People recycle more in Europe and don’t have cars, while in the Midwest, they are necessary. Lax return policies are not a thing in Ukraine, either; her mother Tatyana Lipskaya says returning something to the store in Ukraine is “embarrassing” and “criminal.” In Ukraine, there is no such thing as a garage sale.

Generally, people are less materialistic in Ukraine than in America. Anna says this is demonstrated especially at Christmastime, which is a spiritual holiday in Ukraine during which presents are not exchanged. Instead, people give presents to each other on St. Nicholas Day and New Year’s Day, and Christmas Day is more about family, food and spending quality time together, which Anna prefers to the focus on gifts in America. On holidays, Anna, Tatyana and Mary get together and cook traditional Ukrainian food while wearing their traditional Ukrainian clothes.

“In Ukraine, it’s always about food, all the time,” Anna says.

Another notable difference: American smiles. “It’s a thing,” Anna says, referring to the fact that many Americans have braces to straighten their teeth, which didn’t happen in Ukraine when Anna was growing up. Also, there is no flouride in the water in Ukraine, so people’s teeth are not as white as they are in America. Anna says braces have become more prevalent in Ukraine now, however, as have iPhones, although she is not sure how people are affording them and says “we’re not at the same level” of socioeconomic status.

Anna, Tatyana and Mary often talk, spend time together and cook together. Tatyana says Mary helps balance them and is like the grandmother.

A main difference in the three women’s experiences of immigration, Tatyana points out, is that technology has been prevalent throughout Anna’s move, which has allowed her to communicate more regularly and easily with her friends in Europe, as well as connected with other people from Ukraine in America; Tatyana had to rely on letters, newspapers and television. Anna helped Tatyana learn how to use technology so she could also connect with others from Ukraine when she first moved here.

“It’s like I’m between two generations,” Tatyana says. “I’m modern and traditional. I [am] between. Miss Mary is like more traditional. … But Anna’s like more modern, like European. Probably because she was younger, and she was more in Europe. … It’s a different generation. … The world is open.”

Going through the immigration process can take anywhere from months to years to become a legal citizen, depending on your circumstances, Anna says. Even though it’s easy to get discouraged and give up, she says it’s important to have patience and perseverance because it is worth it: even though they now live in a smaller city, Anna says she feels like she has more opportunities now than if she lived in a bigger city because of cost of living, even though there are things they traded off.

“Now I think we have more opportunities because we progress, and we still try to do better,” Anna says. “Moving from country to country, it’s easy to get disappointed because you lived your life in one environment and then you moved somewhere else totally different, and so adaptation and change [is difficult]. I think a lot of people are struggling with change and not only moving countries to countries — that’s a big change — but even in regular life, changes always creates fear, so it’s important to see through it — even though sometimes that’s hard — to see through it because you don’t know what future brings.”

“For me, every step is scary because, as she said, you have not idea what can happen, but if you will not try, you will never know,” Tatyana says. “Even if people make mistake, you know, it’s just a mistake. It’s no problem; nobody will die. … Everybody should have [a] dream, I think, to do in their life.”