While she was growing up, Ashley Sexton’s parents collected things. Cookie jars, anything with a cow on it, political memorabilia, the list goes on. This, Ashley says, was her way into art.

“Being exposed to the act of sorting through lots of things you don’t like to find the perfect addition to your collection slowly translated into my creative practice today,” she says.

Ashley first took art classes during high school, although at that time, she wanted to be a journalist after she graduated. When she tried to transfer out of her sculpture class, however, her art teacher Mr. Fredrich wouldn’t let her, something she says he still reminds her of each time she sees him in public. It was in this class that Ashley says she found her groove, and she went on to Southeast Missouri State University, where she earned her Bachelor of Fine Arts degree in sculpture.

At that time, Catapult Creative House — a space on Broadway in Cape Girardeau that brings together interdisciplinary teams of student, faculty and practitioner artists, entrepreneurs and programmers — was opening, and Ashley became the gallery manager during her last two semesters at SEMO. Through this position, she got to curate her own month-long exhibition in the main gallery.

“The act of bringing together more than 20 artists whose work I really admired into one space through my own actions was really eye-opening and fulfilling for me creatively, and it started my love affair with curation,” Ashley says. “It was professional collecting without the hassle of having to dust like 30 curio cabinets for the rest of my life!”

It’s these dual practices of collecting and curating that led her to found and coordinate The Public Domain Project, a local project launched in 2020. The project’s concept is simple: bring artists’ original work to the public at an affordable price through a user-friendly interface, which in this case includes the medium of two repurposed newspaper dispensers.

Each month, two artists create an edition of 50 original artworks that are put in the dispensers and sold to the public for 50 cents each. Some of the artists are local, some are Ashley’s friends from school who live all across the country and some are artists who approached Ashley after the initiative launched who wanted to be part of the project. The dispensers are hosted by local businesses for a few months at a time, with the hope to move them around the city to give more people access to original art. Currently, one dispenser is at Catapult Creative House and one is at Annie Laurie’s, both in downtown Cape Girardeau.

“The idea for this project had been living in the back of my head for quite a while,” Ashley says. After graduating from SEMO, she moved to St. Louis where she worked a job “that had absolutely no creative processes,” which was draining for her. “I was trying to think of ways I could scratch the art itch that graduation had left me with. I knew I wanted to recreate the excitement that my curated show at Catapult had brought, but I also knew I didn’t have the experience to break into any traditional gallery scene that St. Louis had going, so it would have to be very DIY. The idea to use newspaper dispensers hit me as I was walking out to my car during my lunch break. I always parked next to this cluster of obviously abandoned newspaper dispensers, and one day, I just looked at it and thought, ‘I could totally throw one of those in the back of my car and make a gallery in one!’” 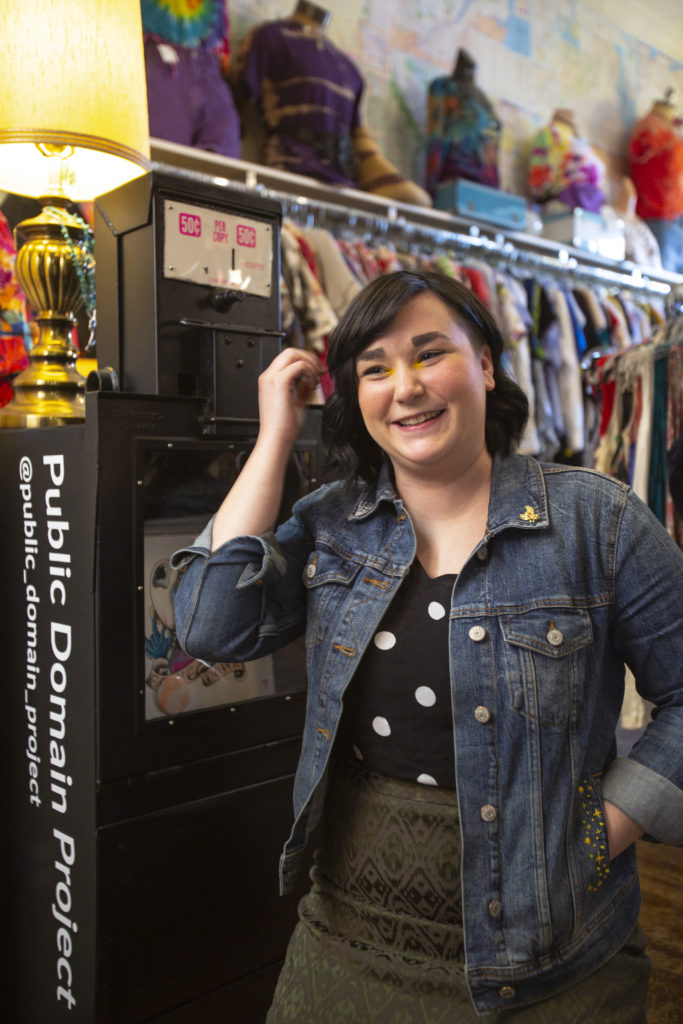 Ashley Sexton, founder and curator of The Public Domain Project, stands in front of one of the newspaper dispensers that dispense art at Annie Laurie’s in downtown Cape Girardeau. Photo by Aaron Eisenhauer.

Upon further research, Ashley found out it’s illegal to steal abandoned items, so she bought two cheap dispensers from a small newspaper in Indianapolis and moved back to Cape Girardeau. Here, she’s making reality her mission of moving art solely from the lives of galleries and “big bucks collectors” into the lives of the majority of people.

“The main goal for this project is to bring the ownership of original art back into the hands of people,” Ashley says. “Owning an object made by another human that you connect with is totally different than walking into a gallery and standing three to five feet away from it. … There is a pride that comes with connecting with something and then being able to make the choice to bring it home and have it live with you.”

Here, Ashley gives insight into some of the thoughts, inspirations and sensory details she is collecting right now. What a lovely curation.

What is something you smell right now?

If this isn’t a sign of the times, I smell Lysol and my pineapple cilantro candle.

What is something you hear right now?

It’s pretty quiet in my house right now. I’m not a huge music person, especially while I’m writing, so it’s the occasional car driving by outside and my very clacky keyboard.

What is something you see right now?

My embarrassingly dirty living room table. Quarantine has not made me a neater person by any stretch of the imagination. Maybe a more interesting answer, though: I just received a new piece of artwork for my collection from a small artist in Brooklyn. It’s a green punch needle square with two giant eyes in the middle kind of looking to the right. It’s still in the bubble wrapper it came in; it hasn’t found a home quite yet.

What is something you’re into right now?

This is 100% the weird collector thing that my parents instilled in me, but I am super into finding (and impulse buying) vintage ice buckets right now. I just bought this really funky 1970s fluorescent pink one that I want to constantly have sitting out on my living room table. It is made out of plastic, but it’s so bright it basically glows! My Etsy likes are a hilarious indicator of my current interests — there will be like 50 listings for ice buckets, and then all the sudden it switches to brass unicorns. I get it honestly, though!

I like this question! One thing I love about Southeast Missouri right now is the energy of change and creation it has going on. It seems like there is always a new restaurant coming into town or a new storefront getting remodeled. I’m from Cape Girardeau, born and raised, and it’s really exciting to move away for a period of time and come back seeing so much new, and not just big box store new but small business new. On the flip side of that coin, I do still see tons of gaps in our community that need to be filled and some cross-community connections that need to be made. It’s the art kid in me, but I would love to see just tons of bright weirdness happen throughout the community, not just in pockets of our downtown scene. I’d love to see some more murals go up on buildings further out in the city.

The personal questions are always kind of difficult to answer. I think the one area of my life that I not only give myself permission to change in but actually pressure myself to change is my approach to getting things done. I think it’s really easy to keep trying the same things over and over again until you find one solid approach that works and then stay in that lane, but I think it’s important to challenge your routines and try things wildly outside of your comfort zone. For example, this article! I usually get really nervous talking about projects I am working on until after they are, but I am really happy to have some questions asked of me that I can use as reflection and learning points as the project is still happening.

One area of my life I have given myself permission to stay the same in is my passion for collecting. My sculpture professor at SEMO said something to me that will always stick with me: “You have to breathe in to breathe out.” I think finding that thing that allows you to breathe all the way in is really important to fostering happiness, and for me that is finding objects that I connect with and bringing them home to display and share with friends and family that visit our home.

Tell us a random fact that you know.

This one is for my sister. If you take all the bad stuff out of chocolate, it is actually good for you! It might not be an actual fact, but fourth-grade Ashley interpreted that from somewhere and harped on it for years to my family. It’s kind of an inside joke with my sister now and takes some of my chocolate guilt away.

Tell us about any art you’re working on right now.

I don’t make nearly as much of my own personal “art” as I did before I graduated, but I like to consider my curation projects as an extension of my creative process. Alongside Public Domain, I am also coordinating a non-traditional “gallery” space that is completely contained in a 26” x 20” outdoor bulletin board, called 26Twenty Gallery. We have had four exhibitions and are currently working on our fifth exhibition that will go live May 1. And because nothing is real unless it has an Instagram page and a website, you can find more about that project at @26twentygallery or 26twentygallery.com.

For more information about The Public Domain Project, including each month’s featured artists, visit thepublicdomainproject.org.