Eat with the women you love.

Liver knaeflies — also known as liver dumplings — have connected the family of Betty Layton of Ste. Genevieve, Missouri, for at least five generations. Layton’s mother, Elizabeth Schweiss, is the first person she remembers making liver knaeflies. Members of Layton’s family still carry on the recipe for this German fare, as they have all acquired a taste for the dumplings and have bonded because of this legacy.

“Keeping family traditions going is important to my family,” Layton says. “It feels so wonderful to know that my children and grandchildren are passing this tradition on.”

Layton’s heritage travels back to Baden, Germany. Her ancestors brought this recipe with them to America in 1840 when they settled in Ste. Genevieve County. Layton remembers attending church every Sunday with her family and then going home to have her mother’s fried chicken and liver dumplings, memories she will always cherish.

After years of making knaeflies, Layton now gets to supervise while her daughter and granddaughters carry on the tradition. Layton’s daughter, Lori Reinagel of Kelso, Missouri, has devoted herself to making this dish for at least two special occasions each year: her husband Ron’s birthday and as part of their Thanksgiving feast. Her family looks forward to sharing this meal together, not only because they enjoy the taste of liver dumplings with homemade gravy, but also because they enjoy being together.

The women say making liver knaeflies is hard work, but worth every bit of it. A special tool called a scraper helps make the job of cooking knaeflies easier. This unique tool resembles a cheese grater and is used much the same: the dumpling dough is poured through a funnel that is scraped across the grater before the dough is dropped into boiling water. By using this tool, the family feels a connection to each other and a connection to Layton’s father, now deceased, who made the scraper the family still uses.

Reinagel’s daughter, Ashley Litzelfelner of Jackson, plans to carry on this tradition with her daughters, Mia, 7, and Abigail, 4. Litzelfelner and her sister, Erika Westrich of Cape Girardeau, have fond memories in the kitchen with their grandmother and mother, bonding over recipes and traditions such as this.

Westrich agrees. “It’s a way for us to form a bond with each other,” she says.

Litzelfelner and Westrich also have three brothers, and they both believe the boys will pass down this recipe to their families, as well.

The family reminisces about other traditions and customs that unite them, such as annual family vacations, holiday get-togethers, adult Easter egg hunts and going to their Grandma Layton’s house for Christmas Eve before attending Mass together. Litzelfelner also tells of the German tradition Layton continues every Christmas by hiding a pickle for relatives of all ages to search for. Litzelfelner believes carrying on family traditions and passing down recipes link past, present and future generations. It helps her feel connected to her German heritage and background.

While making liver knaeflies, Layton is filled with much joy as she watches her family interact with each other. It brings back beautiful memories for her as she remembers the time she spent with her mother and grandmother.

“I think it’s really nice that they are keeping it going,” she says. 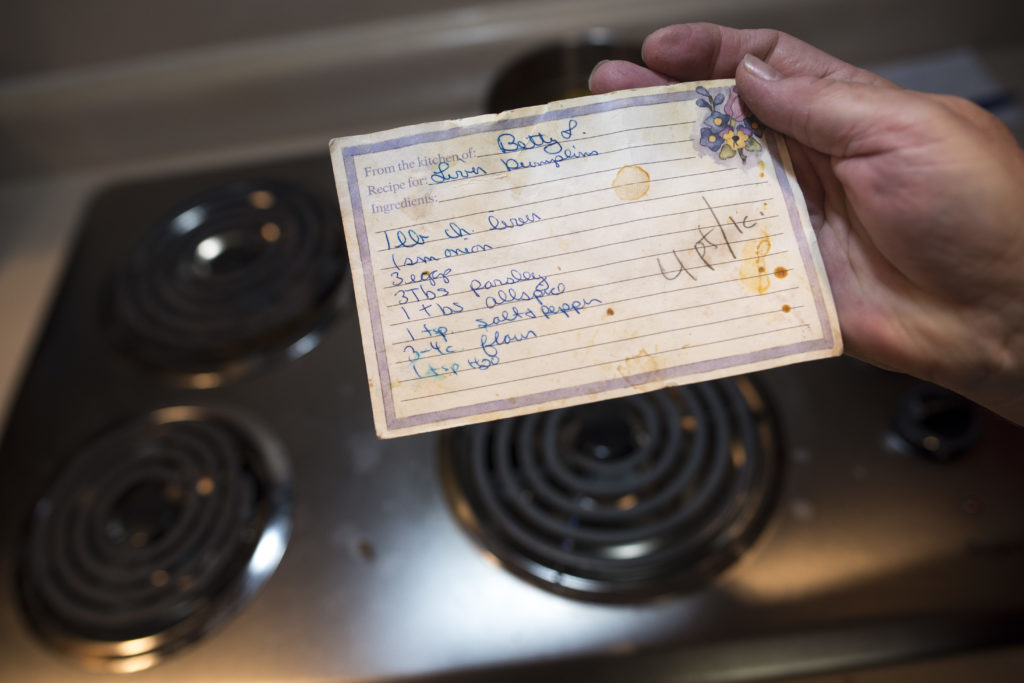 From the kitchen of Betty Layton

In a separate pan, cut ½ small onion and fry in ½ cup of oil until onions are light brown.

Combine all ingredients in a food processor except flour.

Add 4 cups flour and mix. May need to add another cup or so. Dough will be sticky.

Previous Walk Strong
Next Meet Along the Way: Danetta Mason